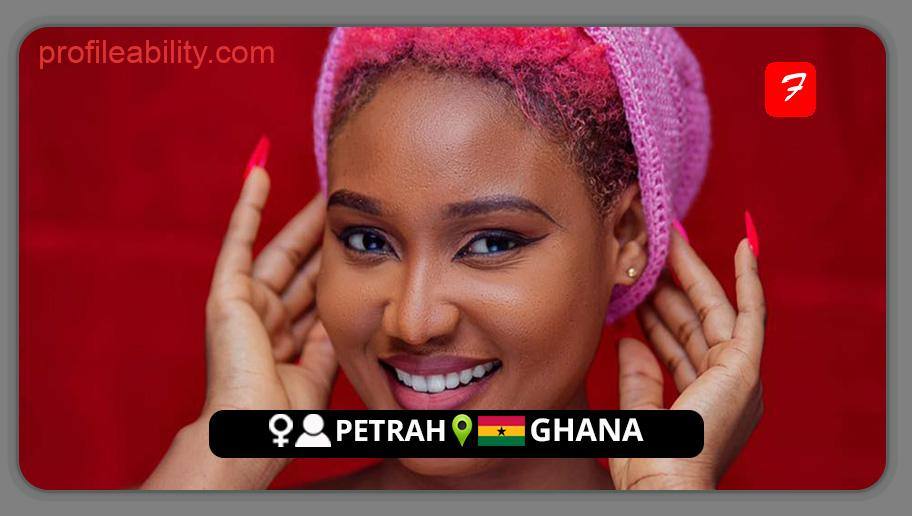 Petrah is an R&B/Soul singer from Ghana who is presently signed to Manner Records. Petra Miriam Tetteh was born on July 23rd in Accra, Ghana, into a family of five daughters and was reared by a devout Christian mother. Her stage name, Petrah is a feminine version of Peter, derived from the Greek word “Petros,” which translates “stone” or “rock.”

Since she was a child, the singer-songwriter has been honing her vocal skills while participating in religious musical events. Her parents were initially opposed to her becoming the celebrity she desired, but as time passed, they came to understand and accept her ambitions.

She attended Krobo Girls Senior High School in Ghana and holds a bachelor’s degree in Marketing from the University of Professional Studies in Accra.

Beyoncé, Whitney Houston, and Tiwa Savage are just a handful of the musical icons that have influenced who she is today.

After being spotted in church, she was contacted by one of Manner Records’ managers, was signed to the label, and began performing professionally in 2016. In March 2016, she released her first single, “My Man,” which garnered her a nomination for the Vodafone Ghana Music Awards in the category of “Best Female Vocalist.”

Her debut duet with Nigerian singer Reekado Banks on the song “Baby” saw her peak in the local and international music charts for weeks, and the music video was nominated for the 4SyteTV Music Video Awards in 2016 in the “Best Discovery Video” category.

Petrah has collaborated with a number of notable artists, including Medikal, Cynthia Morgan, Efya, Shatta Wale, Samini, and Rudebwoy Ranking.

With her most recent releases, “Jeje,” ”Feeling Alright,” “Put It Pon Me,” and “Petralogy,” she is aiming to wow music fans with her distinctive personality and engaging songs.