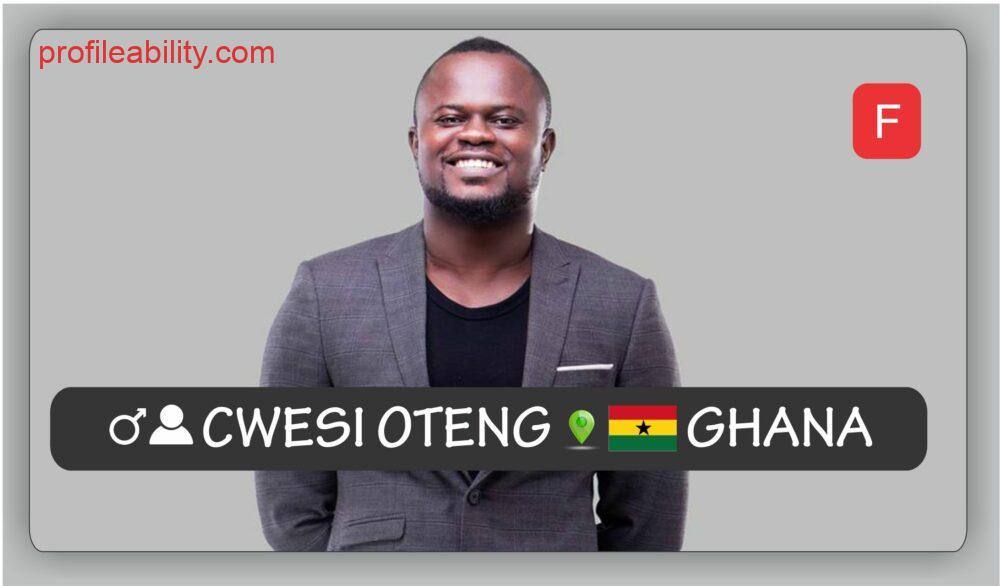 Cwesi Oteng (real name Hermon Cyrus Kwesi Nhyira Oteng) is a young Ghanaian gospel recording artiste, songwriter, youth pastor, creative director, conference speaker and youth advocate who has the calling of bringing God’s message of hope, love, peace, transformation and care to humanity upon him as well as being a voice of assurance for the lonely, rejected, lost and forgotten in society through music and social projects.

Touted as the new sound of African gospel music, Cwesi Oteng’s music reflects his passion, soul and African  connection. However, it is the idea to do away with boundaries relating to race, culture, geographic associations and music genres together with the passion to serve his generation and impact positively the world at large that Cwesi has resolved not to limit his gift and music delivery. His music has that unique signature of urban sound with western contemporary elements but importantly fused with strong cross-cultural African rhythms most often either very prominent or subtle in the background over dynamic vocals that are laced with thought-provoking messages very relevant to current times and appealing to both young and old.

Cwesi recounts as a testimony giving his life to Christ as a teenager and consequently being drawn to the things of God particularly church music thereafter. This lead to over a decade of service, learning and preparation in his local church (Tema Community 8 Lighthouse Chapel Church, Ghana) as a worship leader and music director before making a ministry debut as a solo artiste in 2008 with his ‘Blessed Are They’ album. The album, which had hit songs such as ‘Okurayen’, ‘Look into Your Eyes’, title track ‘Blessed Are They’, among others, according to Cwesi was a major learning experience for him and a product of his life experiences, young ministry and relationship with God, fore showing a great trail in ministry that beckoned him.

True to this, ever since receiving the inspiration from God to re-brand and re-structure his music and ministry, add impacting young people as another focus and embark on charity works in 2010, a new chapter began in Cwesi’s ministry. He has been garnering attention all over the world for his passionate, creative and quality music that has life changing messages particularly after releasing his inspiring hit single ‘Mercy (But for Your Mercy)’, plus it’s video in 2010. The accolades earned by the hit single alone have built for Cwesi a very influential image as one of the most attractive gospel music brands raising the flag of African gospel music so high.

Some of the honours received recently include:
*Multiple nominations at the 2011 Africa Gospel Music Awards (including Best Gospel Video & Discovery of the Year),
*Best New Artiste of the Year at the 2011 Ghana Gospel Industry Awards (he had multiple nominations here too)
*’Best Gospel Video’ at the 2011 Vodafone-4syte Music Video Awards, Ghana.
*‘Best Lyrics for a Most Wanted Song’ award at the Christian Community’s 2011 Most Wanted Contemporary Gospel Music Awards held in February.

‘Mercy (But for Your Mercy)’ is the first single off Cwesi highly anticipated ‘Mercy Project’ album which has been finally scheduled for release Spetember this year, 2012. The second official single off the Mercy Project’ album is ‘God Dey Bless Me (Speak Those Things). ‘God Dey Bless Me’, released early 2012, became an instant hit online and is currently receiving heavy rotation on radio all over Africa, in UK and US and breaking grounds onto secular radio and TV shows as well. The video for the hit song has just been released and already rave reviews are pouring in from all over the world tagging it as one of the overall best gospel music videos to have come from Africa. The song and video has propelled Cwesi to receive three prestigious nominations (Song of the Year, Video of the Year & Artiste of the Year West Africa) at the 2012 Africa Gospel Music Awards during Winning the Video of the Year Category.

With the amazing feats chalked by two prelude singles off an upcoming album and fans’ growing anticipation for the album release, Cwesi says, ‘… the stage cannot be better laid for the official launch and release of my highly anointed, inspiring and creative ‘Mercy Project’ album in September 2012. The Lord has something great for everyone so keep your fingers crossed’.

Add to Favorites A Ghanaian born youngster Prince Samuel Amoafo Junior known in showbiz ask Yaw Juce is an RnB Hip-hop artists who hail from Kwahu in the Eastern region of Ghana. This fast and Read more…

Add to Favorites   Asomani Jr.(Jeffrey Asomani) born on April 18th in the year 1997 is a 22-year-old Ghanaian Afrobeat musician based in the U.S. He was born in Accra, Ghana but left for Italy with Read more…