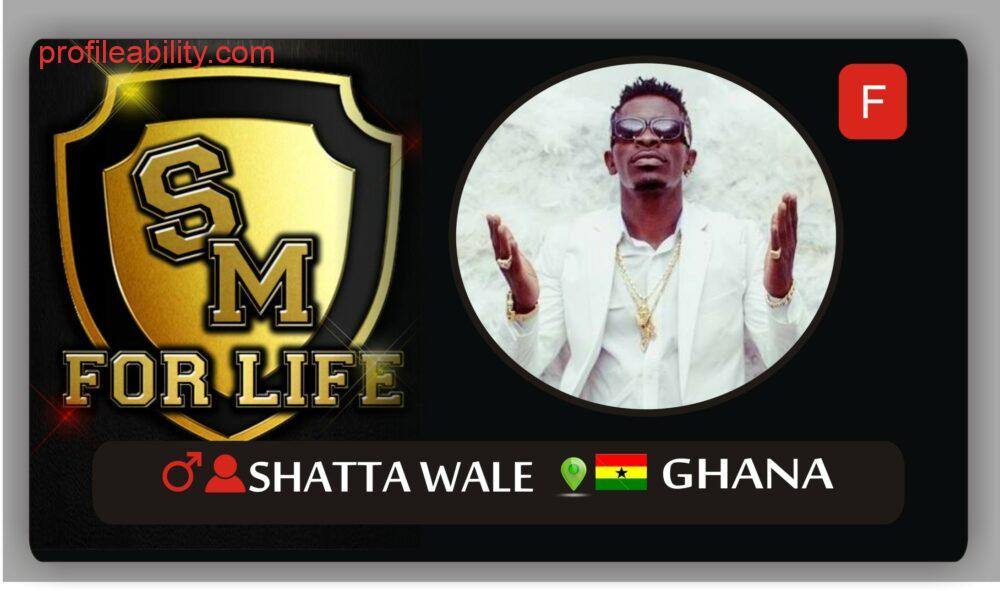 Shatta Wale’s real name is Charles Nii Armah Mensah Jnr was born on (17th October 1984), Shatta is a Ghanaian-born producer and reggae-dancehall musician. He is best known for his biggest breakthrough hit song Dancehall King which led to winning the Artiste of the Year at the 2014 edition of the Ghana Music Awards.

Shatta Wale has in recent times demonstrated that he can act as well by featuring in his first-ever movie titled Never Say Never featuring Charles Kofi Bucknor, Edward Kufuor and Paulina Oduro and also featuring in Shattered Lives along with Bisa K’dei and Majid Michel.

Charles attended Winneba Secondary School and during that time he was popularly known as ‘Ayoz’. He changed his name to “Bandana” after senior high school and released the hit track “Bandana from Ghana”. The song made tremendous airwaves in the Ghanaian music industry in 2004. After the release of his first Album titled Bandana from Ghana, then Bandana went on musical hiatus until he re-branded himself to Shatta Wale and released his hit song Dancehall King in 2013. He is the leader, chief executive officer (CEO) and founder of the Shatta Movement (SM) or (SM4LYF).

Shatta Wale’s rise happened at the 2013 VGMAs, with his musical dexterity, he composed a song against the organizers of the Ghana Music Awards titled Me Need No Awards because he alleged the organizers robbed him of the Dancehall Artiste of the Year to female Dancehall Artiste Kaakie. The song had very uncharitable lyrics. This the media, bloggers, and other entertainment pundits claim led to his breakthrough and relevance in the Ghana Music Industry.

His greatest hit in 2013, Dancehall king took the airwaves by surprise. Shatta wale’s musical revenue is mostly generated through the hosting of shows which attracts thousands of Ghanaian youths.

In January 2014, Shatta Wale, joined hundreds of Ghanaians to welcome the Queen’s Baton Relay, which was on a tour of some Commonwealth countries, ahead of the games in August 2014. Grateful for the opportunity given to him, he took to social media to thank those who made it happen.

” It happens once in a lifetime.I will like to thank the president of Ghana and the nation for granting me the opportunity to be part of the change in the Queens Baton. God bless my homeland Ghana.#SM4LYF.”

In May 2014, British Newspaper, The Guardian, reported that the five must-listen to tracks from around the world includes Shatta Wale’s song Wine Ya Waist featuring Davido from Nigeria. In the same year 2014, his song You Can’t Touch Me was widely used for the Dancers Against Racism Campaign Worldwide.

In 2015, Shatta Wale asked not to be nominated in the Vodafone Ghana Music Awards even though he could have won the prestigious Artiste & Song of the year for the second time running with his hit songs Dancehall Commando featuring Sarkodie, Party all night long featuring Jah Vinci, Wine ya waist featuring Davido and Korle Gonno among many hit songs he released the preceding year: because of a pending court case with the organizers of the awards, Charter House Productions Limited for allegedly making defamatory remarks against the CEO of Charter House in a video he uploaded on his Facebook page.

Shatta Wale’s hard work in 2014, got him nominated for the maiden GN Bank Awards as the People’s Choice Male Musician of the year. He was also named the 38th Most Influential Ghanaian by E-TV Ghana in 2015 in their annual survey of influential people in Ghana. He is the dancehall Messiah. He resurrected the dance hall in Ghana. Shatta Wale Almost Clocked Hundred Songs for 2015.

During the Christmas festivities of 2014, Shatta Wale took the opportunity to visit the Korle-Bu Teaching Hospital Ghana’s biggest hospital to donate generously to the Children’s Block worth Thousands of Ghanaian cedi whilst many were spending time with friends and family.

Shatta Wale, Light A Million Lives, and Quallo’s Production along with Gasmilla, Keche, Episode, and Dada Halfco donated to the victims of the twin disasters (flood and fire) that occurred in Accra on 3 June 2015 in which hundreds of people lost their lives. The group brought along Food, Water, Antiseptic Liquid, Antiseptic Soap, Wipes, Sanitizers, Clothes, and a whole lot of items to support the victims.

As part of his philanthropy works, on February 8, 2016, Shatta Wale donated some items to the Police Hospital in Accra. These items included 3 LED TVs, Wheel Chairs, Beverages, Detergents, and many others. He also made an undisclosed cash donation to save the life of a young girl and also to help with general administrative work at the government-owned establishment.

According to Shatta, he chose the Police Hospital because “Today we donated some items to the police hospital in Accra-Osu. Since this was the hospital I was born in, I and my shatta movement management and crew decided to visit the children’s ward. We will be visiting most hospitals as time goes on..#notime #SMTAKEOVA”. Shatta, on an educational campaign dubbed “Shatta Back to School Campaign” along with his Shatta Movement Management Team donated some educational materials to some schools was selected in by the team in collaboration with the regional unit of the Ghana Educational Service as well as the Techiman Traditional Council.

In 2014, Shatta Wale was unveiled as one of the brand ambassadors of Guinness Ghana Breweries along with other musicians like Reggie Rockstone, EL, and Fuse ODG for Made of Black campaign. Shatta, the dance hall superstar has also been unveiled as the brand ambassador for the newest energy drink on the market the Storm Energy Drink.

[…] looks up to musical icons like Kojo Antwi, John Legend, Kwabena Kwabena, Stonebwoy and Shatta Wale. His mother’s name is Rose Nettey who is half Ga and half Akuapem and his dad’s name is […]

[…] Kinaata has done major collaborations with artists such as; Sarkodie, Shatta Wale,  Samini,  Stonebwoy,  Kwesi Arthur, Jayso,  Castro, Becca among others. One major […]