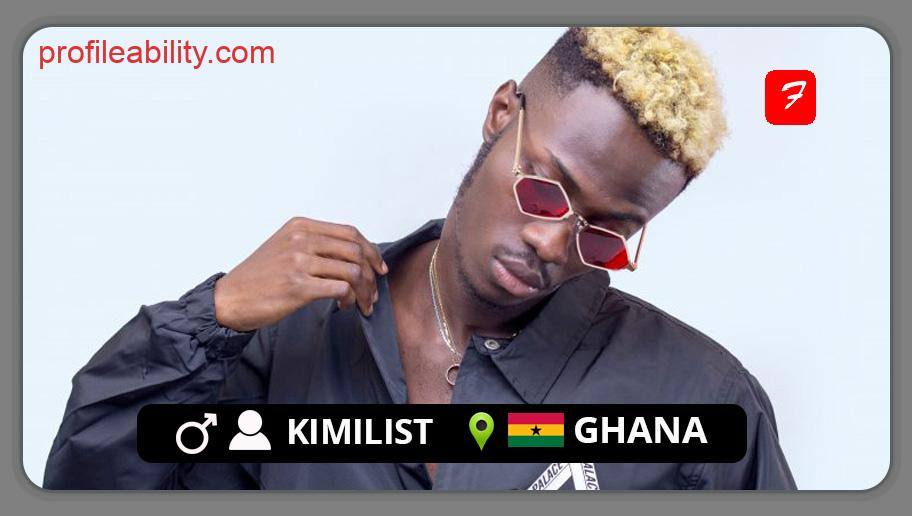 Kimilist whose real name is Osei Kwame Junior is a Ghanaian artiste who grew up in Kumasi in the Ashanti region. Born on the 9th of November 1996, He attended his basic, senior high, and University in Kumasi. He showed glimpses of his potential in SHS when he would rap over beats made by friends by either banging on tables or beatboxing. Kim would later start recording during his days at university in KNUST.

As an artist, Kimilist specializes in rap with a large influence from the UK rap scene. He blends Grime, Trap as well as Afrobeats and other Afro-fused genres. Moreover, Kimilist’s biggest musical influence is Kanye West who has influenced not only Kim’s music-making but fashion and lifestyle. Kim enjoyed a level of success in university with his rendition of J Hus’s “Did You See” titled “Party god”. He went on to perform at the biggest concerts, events, and parties on and off-campus. His dedication and zeal would put him on the radar of Tema-based record label Mimlife Records who would go on to sign him in 2019.

Kim’s first song under the label “Yawa” produced by Kuvie enjoyed airplay on radio and TV which would kick start his career professionally. He would go on to release a rap mixtape “Flaws and Joy” which earned him slots on some platforms including EL’s Bar Concert, MMC Live, Music Is My Life Concert, R2bees and Friends among others.

His list of songs includes Borkor Borkor, New Sound, Pressure, Kyer3 and Sika. His music exploits have seen him rewarded with multiple award nominations including two nominations at the 2022 Ghana Music Awards UK for Best New Artiste and Hiplife/ Hip-Hop song of the year.

One On One With SDK Hosted By Mc Lil Beatz