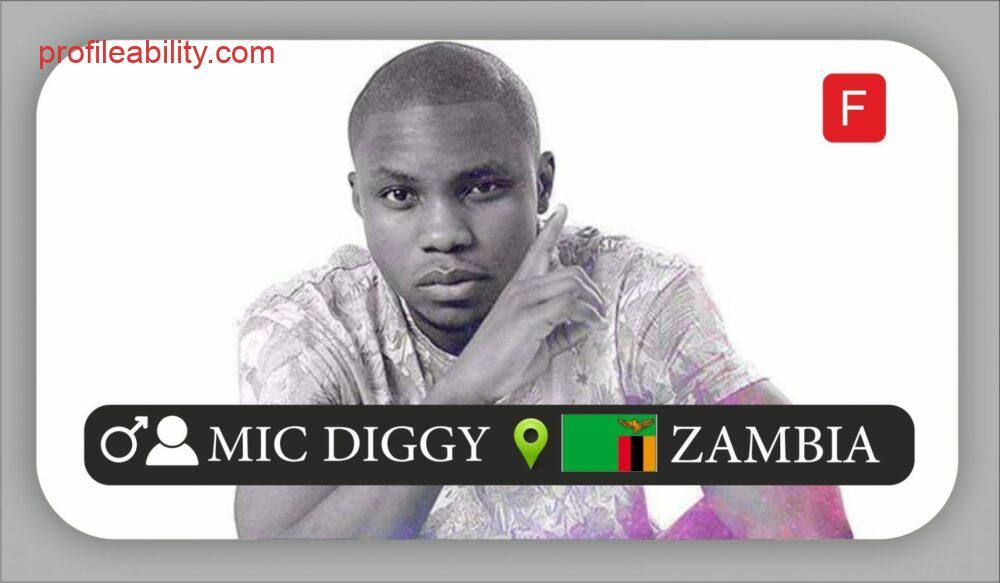 Michael Bashiri Banda (born 8th June, 1993) professionally known as Mic Diggy or Lord Diggy, is a Zambian rapper, singer, songwriter, record producer and entrepreneur. His debut album (EP) “Elevation” was released on the 8th of January, 2016. He is currently signed to his own independent label “The Company Records”. Diggy grew up in Lusaka the capital and largest city of Zambia where he attended both high school and college and developed a passion for music. During high school at “Munali Boys Secondary”, he was very athletic as he partook in numerous sports activities including and not limited to sprints, football and basketball.

Furthermore, he was a school librarian and active member of the junior engineers, technicians and scientists “JETS”. He started rapping when he was in grade 9, at the age of 15. After graduating from high school in 2011, inspired by Zone Fam and Slap Dee.

Two years later, at the age of 20, he decided to pursue a career in music as a rapper, songwriter and producer. Diggy first started recording under the name Mic Dee. In 2016, he changed his stage name to Mic Diggy. In 2009, he was a member of a group called Boys in the hood which later disbanded. He then decided to pursue a solo career as a rapper and learn music production. After high school graduation in 2011, three years later he bagged a record label deal with Phat Jam Records where he recorded his first professional single as an up-and-coming artist dabbed Tulamemengela ft DJ Fireman.

After a year without release, he left to start a label of his own to no avail. He started to generate a local buzz in 2016 after Dropping the Elevation EP few months later he released the singles “No Pressure”, “Sangwapo” and “Blame” which featured frequent collaborator Trigga. The songs were well received and playlisted across various radio stations in Zambia and neighboring countries with “No Pressure” debuting No.4 on the Unza Radio Top 10 Charts for over five weeks and “Blame” made it out on Naijapals one of the biggest music and dating website in Nigeria. In 2016, he released “Blame” as the first official single from his upcoming album, Aftermath. The single was first premiered on Power FM Zambia’s Route 997, it was well received and playlisted across various radio stations in Zambia and other neighboring countries including Malawi and Nigeria. After “Blame”, he released two singles titled “No Pressure” and “Sangwapo” which saw him gain local popularity. The song “No Pressure” peaked at number 4 on Unza Radio’s ZED Hot Spot, Official Top 10 Chart.

The song received positive reviews from the public and Radio Stations in Zambia. His debut release, Elevation EP, was released on 8 January 2016 for sale only on Digital platforms and it bagged 6,000 streams in total. His biggest performance was at the Mosi Day of Thunder in Livingston were he shared the stage with Cassper Nyovest The award-winning South African Rapper and Highest selling Hip Hop act in Africa. Among others, the show featured local acts such as B-Flow, Bobby East, Jay Rox, Wezi, Pompi, Abel Chungu, Magg44 , KRYTIC, and many more. He also shared the stage with local Hip-Hop sensations and Multi-Award-winning artists Chef 187 and Macky 2 At the festival held in the Levy Mwanawasa Stadium in Ndola. Diggy was involved in a ‘beef’ with fellow Zambian artist and one-time idol Slap Dee, this led to both artists trading Jabs in songs and Diggy later recorded a full diss track against Slap Dee dubbed “Chibeleshi” (Idi Amin) and it featured vocals of the 3rd Ugandan President Idi Amin Dada. The beef started on Twitter when Mic Diggy tweeted Slapdee’s 2018 Freestyle was below average. This was received with Mixed feelings by Slapdee who later decided to trash Mic Diggy’s opinion and even cussed him out.

A few days later During an interview on Unza Radio, Diggy detailed his beef with Slap Dee, took several shots at him, and Sampled XXL (a song in which the rapper mocked Slap Dee). After the release of his new single “Julia”, Diggy hinted he to be dropping his first solo album later this year and revealed the title will be Aftermath, on his official social media profiles.

You won't believe what these two baddies did next. Holy sh*t🔥🙆🏾‍♂️🤤

He gotta be my all time favorite radio personality 😂😂😂