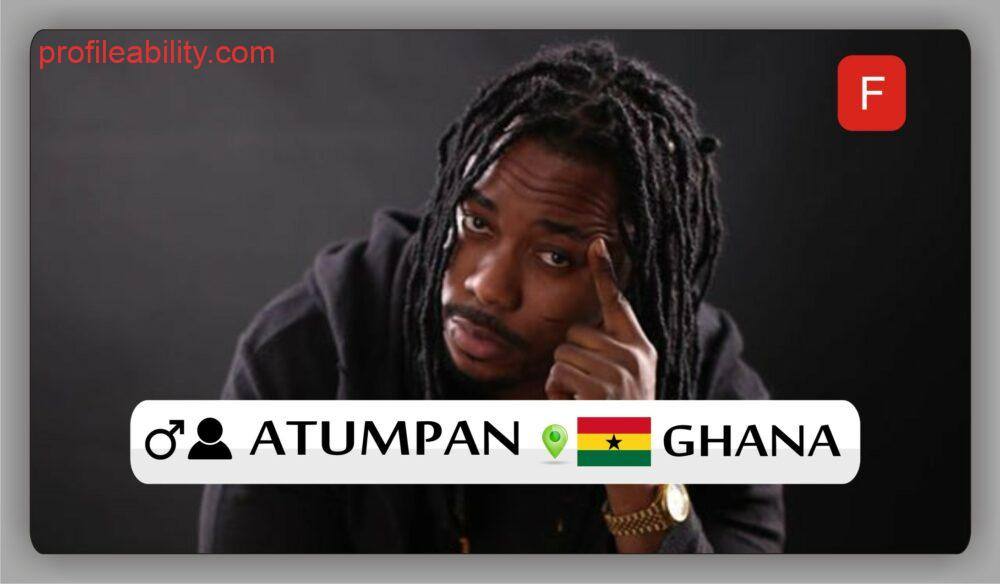 Atumpan who is known in real life as Frank Elinam Cobbinah is the first of four children, born on the 24th December 1983 and hails from Avenor in the Volta region of Ghana.

He had his basic education at Yaa Asantewaa M/A primary and junior secondary school at Kumasi in the Ashanti Region and continued to Boa Amponsem senior secondary school in the Central Region of Ghana, where he served as entertainment prefect. In 2002 he gained admission into Wiawso College of Education where he trained as a professional teacher. With a Diploma in Basic Education certificate, he taught as a professional teacher in ZION No2 D/A Primary School from 2005 to 2008. In October same year, he gained admission into University of Education Winnneba, where he read a Bachelor’s Degree course in Linguistics majoring in English Language.

Atumpan which literally means ‘’The Talking Drum’’ is the name of a popular traditional African drum which in the past was used as a medium of communication between the ruling and the ruled especially during wars, festivals and emergencies. This drum is also known as the Master Drum because it is the most important instrument in almost all the Akan dance ensembles in the southern parts of Ghana such as Adowa and kete. Atumpan as an artiste therefore sees himself as a representation of this important drum in that he carries his message across to Africa and the world at large through his powerful voice and music just as the drum does. Growing up, Atumpan was introduced to choral music by his step mother who registered him to his church’s children’s choir at a very tender age. He sang in the church for years, graduated to become choirmaster, before he decided to pursue music outside the church. He still loves his Methodist hymns and choral music very much and that is manifested in two of his songs Psalm 23 and Akpeh (thanks).

Atumpan is a strong pan-African who believes that the only way African musicians can capture the attention of the world is to stay true to themselves as Africans and reflect that through their music. His popular hit single ‘the thing’ which had three nominations in the 2011 Vodafone Ghana music awards demonstrates explicitly how he fuses his Indigenous Ghanaian highlife style with funky house garage and deep house techno flavors. His songs Moyerh afrikana, music is Life, Let’s take a ride, Mad Bad, Ago Give You, Ozimzim, Akonoba, Sisimuden just to mention a few, are of no exception. Atumpan is a versatile artiste who is very much influenced by urban trends in music especially Caribbean dancehall and reggae. His love for dancehall music is exhibited in his songs, especially through his sensational add lip sing tune ‘Anyeeeeiii’ which runs through almost all his songs. In his own words he says: ‘even though I love dancehall music so much, my kind of dancehall is different and African’.  He has collaborated with the likes of Cabo Snoop, Donaeo, Lady Leshur, Sound Sultan Ginalee, sizzler kalonji, VIP, Stay Jay, D cryme, 4X4, and so on.

In August 2013, he was privileged to have signed a Single Deal with the popular British label Ministry of Sound which got him on various prestigious platforms including BBC 1xtra Trevor Nelson’s Live lounge, 2013 Nottinghill Carnival (Toddler T’s Stage) and AMB/Capital Xtra Afrobeats festival at the popular at Summerset House and the popular o2 arena.