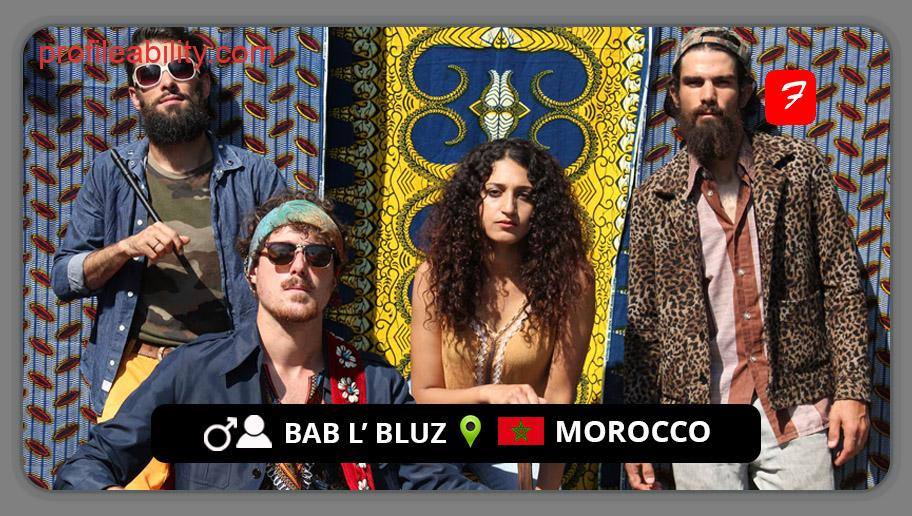 Bab L’Bluz is a Moroccan-French rock band that was established in Marrakesh in 2018, fronted by an African-Moroccan woman in a typically masculine role, reclaiming the blues for North Africa.

Through an arched entryway into the medina, amid a maze of lanes lined with stores selling spices and fragrant oils, rare records and handcrafted instruments, emerges the sound of the blues. It appears to pulse from the heart of the Maghreb, ancient and modern, funky and rhythmic, boosted by Arabic lyrics, soaring vocals, and bass-heavy beats.

Bab L’ Bluz is committed to a cultural revolution that coincides with Morocco’s “nayda” youth movement — a new generation of artists and musicians that draw inspiration from local culture and sing liberation songs in the Moroccan-Arabic dialect of Darija.

Gnawa music, blues, Chaâbi, and Afrobeat are among the musical styles that Bab L’ Bluz takes inspiration from. Bab L’Bluz has fun merging ancient qraqebs (metal castanets) with Jérôme Bartholomé’s flute, Hafid Zouaoui’s rock, afrobeat rhythms, funk accents, and the lightness of Chaâbi music because it has a vision and a feeling of celebration.

“Nayda!” was their debut album, which was released in 2017 with excellent reviews. The album, “Nayda,” combines Gnawa trance rhythms with rock and curling incense. Critics complimented the band for their ability to integrate numerous genres as well as their genuine depiction of Moroccan musical legacy, which they described as both poetic and powerful.

The Drummers of Burundi at WOMAD Festival in 1982