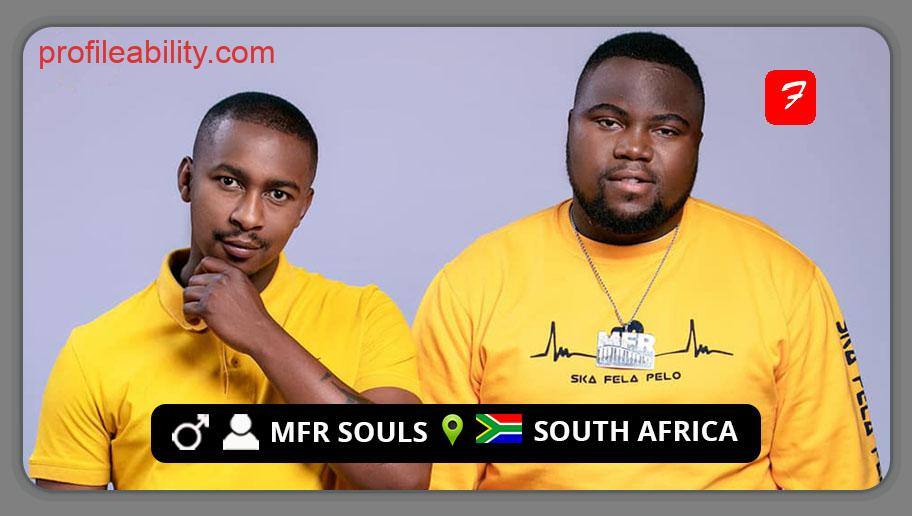 MFR Souls is a South African music duo comprised of two well-known DJs and music producers who grew up in Katlehong, East Rand.

The Amapiano duo was formed in 2013, but their major breakthrough came in 2019. They released the track “Love You Tonight” on October 4, 2019, which featured Sha Sha, Kabza De Small, and DJ Maphorisa. Their smash hit “Love You Tonight” was certified platinum in South Africa.

Since their success, the pair has been releasing incredible music. Their single, “Love You Tonight” was nominated for Best Collaboration and Best Music Video at the 26th South African Music Awards. The album “Scorpion Kings,” which they collaborated on alongside Kabza De Small, Virgo Deep, and DJ Maphorisa, won Best Produced Album of the Year at the SAMA 26 awards.

Their Extended Play “The Beginning” was published on November 8, 2019, and their song “Amanikiniki” starring Kamo Mphela and Bontle Smith was released in early 2020. With sales of 50 000 units, “Amanikiniki” debuted at #3 on the RAM charts and was certified platinum. At the 27th South African Music Awards, the song was nominated for Record of the Year (fan vote) and Music Video of the Year, as well as Song Of The Year at the MAMA awards.

MFR Souls are at the vanguard of Amapiano, a new trendy and exciting music.

MFR Souls play to their 1st ever SOLD OUT show in Amsterdam, Netherlands for Pianoland.

Behind The Scenes, the making of the Spharaphara Music Video

Walking in while the kids are doing the #Spharaphara dance challenge