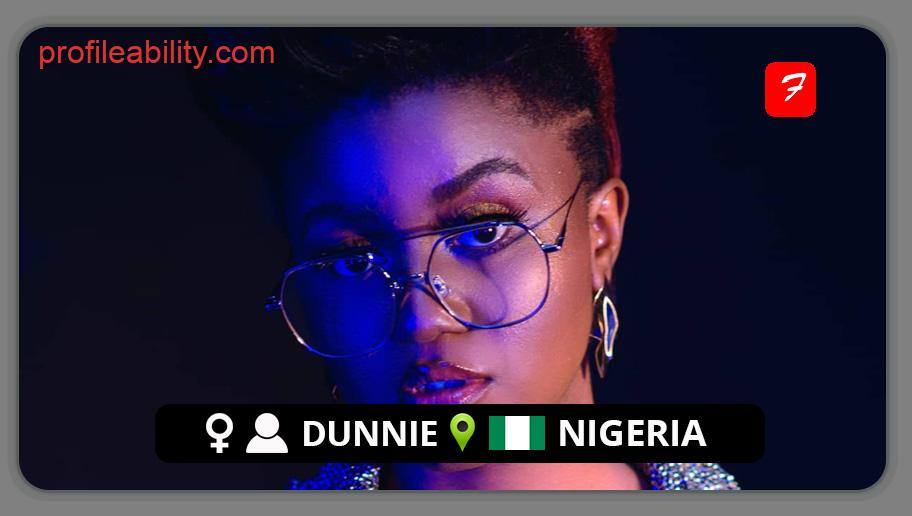 Oladunni Lawal popularly known by her stage name as Dunnie is a Nigerian female artist, songwriter, and record producer who promotes her music independently. The Abuja-based vocalist was born in 1992, and her outstanding skill demonstrates how she fuses soul with Afro-pop and hip hop. She discovered her singing skills from a very tender age and began singing solos and lead vocals in her local church when she was 12 years old.

She created her debut track at the age of 15 in 2007 and has since been composing and performing at numerous community events. Dunnie began playing guitar at the age of sixteen.

In 2011, Dunnie made her debut in the industry, when she recorded her first single, “E Go Better,” which was a Top Ten tune on Cool FM Abuja for three weeks in 2012. She has been actively creating and promoting her music since then.

The release of her EP titled “Seven,” on July 7th, 2018 dubbed with seven amazing tracks like “Simpulu’’, ‘’Gbemiloke’’, ‘’Unconditionally’’ and many others is a well-received breakout piece commemorating her seven years of a professional music career.

When questioned about the sources of her inspiration, Dunnie replied, “I was primarily influenced by Fela, Duncan Mighty, Taylor Swift, Tunji Oyelana, and Osita Osadebe for this endeavor.”

To name a few, she has worked with artists like Ric Hassani and Fiokee. However, her music is extremely unique from those of these other musicians.

Dunnie - Mosafejo (Behind The Scenes)

THE MOST EXPENSIVE AFROBEAT

BECCA - NO ONE (PRODUCTION BREAKDOWN)