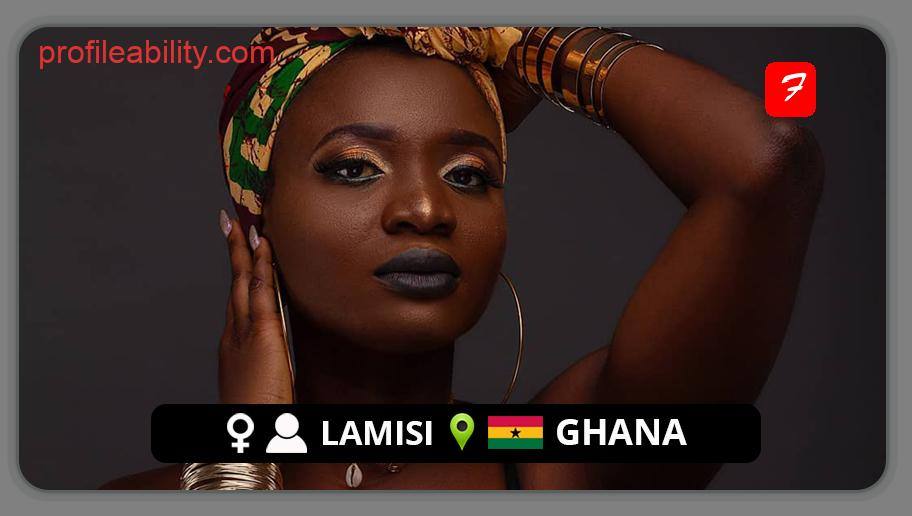 Regina Lamisi Awiniman Anabilla Akuka, better known by her stage as Lamisi, is a Ghanaian singer and songwriter who has carved a name for herself as one of the most beautiful, sensuous, and emotive voices in the country. She is from the northern city of Zebilla. Lamisi, who was born in 1986, is naturally gifted and has a unique ability to sing rhythmically and with syncopation.

She received her primary education at St. Peter’s Methodist JSS and subsequently transferred to Ashaiman Senior High School for her secondary schooling. She earned a Bachelor of Science in Marketing from the University of Professional Studies before pursuing a Master of Philosophy in Dance Education from the University of Ghana.

Lamisi began her career as the lead vocalist with The Patch Bay Band, where she gained experience playing around Ghana with nearly all A-Class singers. She was included in Irie Ites Studio’s debut Reggae/Dancehall compilation in Ghana in 2016.

She began her solo career adventure after 8 years with the band, releasing her debut Afro-Fusion-Pop single “Tanka Fanka” in 2017. Lamisi’s music encompasses a wide range of genres, including Afro-soul and pop.

Her debut album, titled “Brighter Side,” was unveiled on February 23, 2019, and it shines with the radiance of its title.

Her multifaceted voice has propelled her to a legitimate level, allowing her to work and cooperate with artists from internationally known names such as Rocky Dawuni, Stonebwoy, Sarkodie, Samini, Amandzeba, Atongo, Becca, Afro Moses, Patoranking, and Lady May from Namibia.

Since then, the talented vocalist has performed live at some of Ghana’s most prominent musical events, including the Vodafone Ghana Music Awards (VGMA), the Stanbic Jazz Festival 2019, the Ghana World Music Festival, Africa Legends Night 2019, and many more.