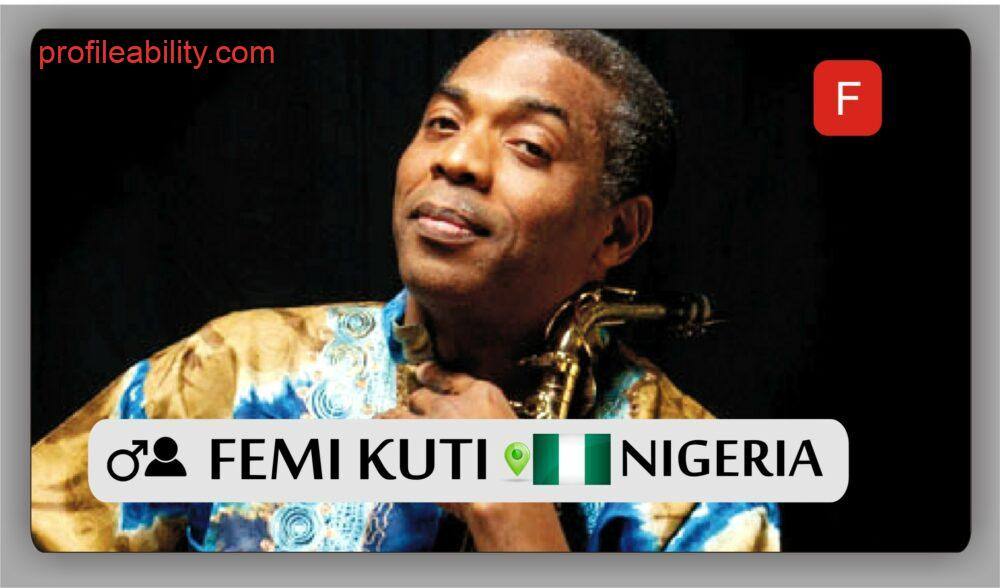 Femi Kuti was born Olufela Olufemi Anikulapo Kuti on June 16, 1962 in London.He is the eldest son of afrobeat pioneer Fela Kuti, and a grandchild of a political campaigner, women’s rights activist and traditional aristocrat Funmilayo Ransome Kuti.He grew up in Lagos, Nigeria,

Femi’s musical career started at 15 when he began playing in his father’s band, Egypt 80 in 1979.

On December 13, 1986, Femi started his own band, Positive Force, and was joined by his sisters Yeni and Sola (as the lead dancers) and began establishing himself as an artist independent of his father’s massive legacy.

The band’s first show was at the University of Lagos (UNILAG) in that same year.

His first record was released in 1989, No Cause for Alarm, (Polygram records) followed by MYOB in 1991 (Kalakuta Records). Four years later he released title Album Femi Kuti under Tabu/ Motown, and in 1998 Shoki Shoki (MCA), which garnered widespread critical acclaim.

In 2000  he opened The Shrine, his club, where he recorded the live album Africa Shrine.
He wan a Monaco “World Music Award” that same year !

In 2001 he collaborated with Common and Mos Def on Fight to Win, and started touring the United States with Jane’s Addiction.

After a 4-year absence due to personal setbacks, he re-emerged in 2008 with Day by Day and Africa for Africa in 2010, for which he received two Grammy nominations.

In 2012 he was both inducted into the Headies Hall of Fame (the most prestigious music awards in Nigeria) and was the opening act on the Red Hot Chili Peppers’ European Tour, and became an Ambassador for Amnesty International.

He continues to expand the diversity of his artistry on his 2013 album No Place for My Dream (another Grammy nominations !).

Like his father, Femi has shown a strong commitment to social and political causes throughout his career and continues to fight for a free and fair Nigeria.