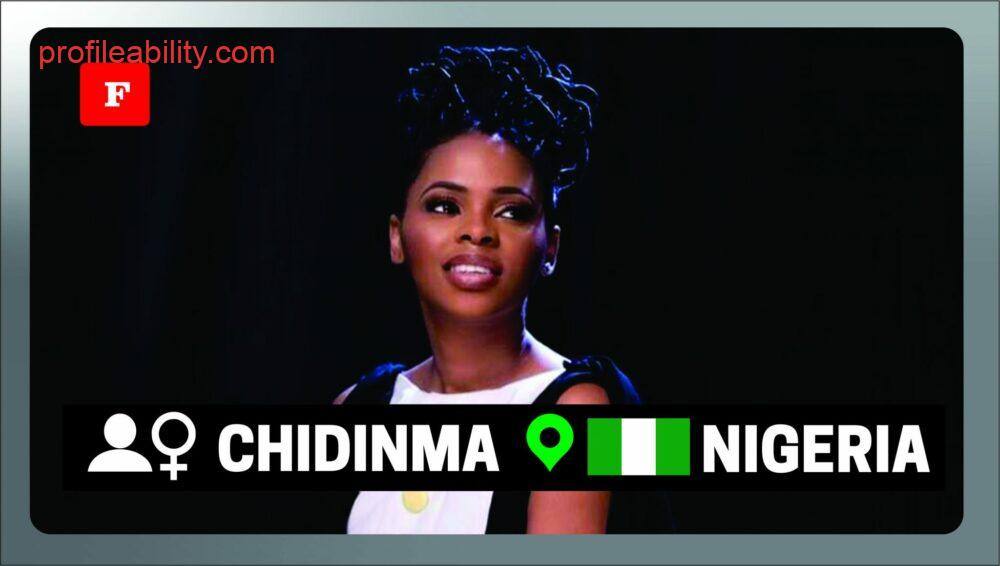 Chidinma Ekile (born 2 May 1991), popularly known by her stage name Chidinma, is a Nigerian singer-songwriter, recording artist and stage performer.

In 2010, she rose to stardom after winning the third season of MTN Project Fame West Africa.Following the release of the music video for her “Emi Ni Baller” single, she became the first female musician to peak at number 1 on the MTV Base Official Naija Top 10 chart.

In 2011, she released her first solo single “Jankoliko” featuring Sound Sultan. Chidinma, her self-titled debut studio album, was released through the music platform Spinlet. It was supported by the singles “Jankoliko”, “Carry You Go”, “Kedike” and “Run Dia Mouth”. The album features guest appearances from Sound Sultan, Tha Suspect, Olamide and Muna.

On October 11, 2011, Chidinma released “Kedike”, the album’s third single. The song translates to “Heartbeat”, and was produced by Cobhams Asuquo. In an interview with Entertainment Rave, Chidinma said that “Kedike” is a song that depicts love. She and her producers invented the word “Kedike”. On October 11, 2011, she also released the album’s fourth single “Run Dia Mouth”. The music video for “Kedike” was released on January 24, 2012. It was directed by Clarence Peters, and released at a total length of 3 minutes and 5 seconds. Dammy Krane, a recording artist signed to Tuface’s Hypertek Records, played Chidinma’s love interest in the music video.

In 2012, Chidinma won the Best Female West African Act category at the 2012 Kora Awards; she performed “Kedike” at the ceremony.

Chidinma started working on her debut studio album, Chidinma, after releasing a collaborative project with the other finalists of MTN Project Fame West Africa Season 3. The album was scheduled for release in the fourth quarter of 2011. Chidinma spoke briefly on her album and said that she put a whole lot of energy into the album. Chidinma worked with different producers for her first studio project, including Cobhams Asuquo, Tee Y Mix, WazBeat, and Oscar Heman Ackah.

Chidinma - For You [Official Video]