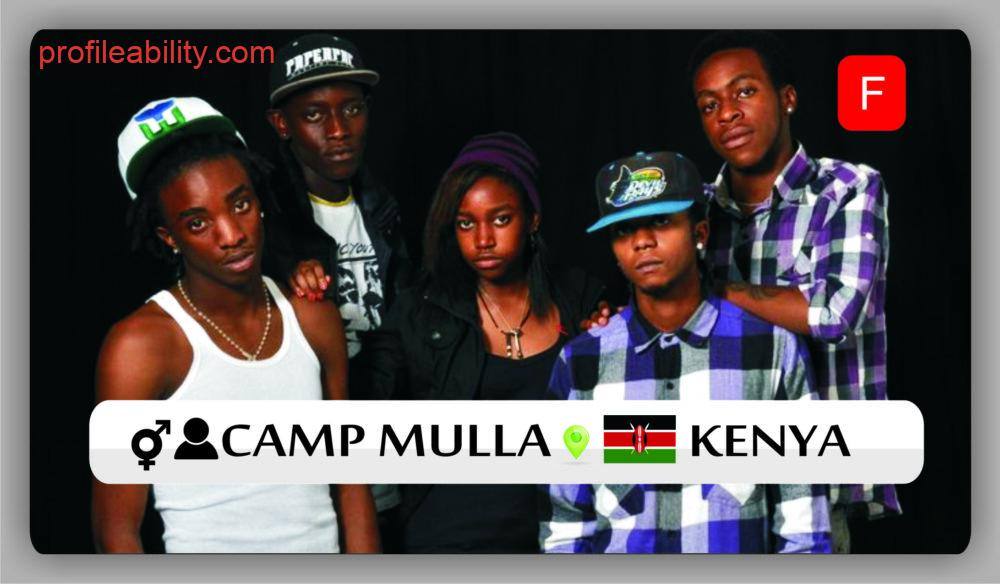 Camp Mulla is a Kenyan alternative hip-hop group originating from and based in Nairobi, Kenya.

The group has grown a big fan base over a short period, having over 40,000 fans on Facebook and over 30,000 followers on Twitter (more than any other Kenyan artist).
The group is considered one of the most exciting upcoming music groups in Kenya. However many adults aged 30 and above have criticised their “bubblegum music”, according to the Buzz feature on the Sunday Nation website.

During the 2012 Chaguo La Teeniez Awards held on 20 April 2012, Camp Mulla won the awards for “Teeniez’ Group or Collabo” and “Teeniez’ Nu Artist”

Camp Mulla was nominated in the 2012 BET Awards for the “Best International Act – Africa” category, becoming the first Kenyans to ever be nominated for a BET award in the process, alongside Lira, Mokobé and Ice Prince, but losing to eventual winners Sarkodie and Wizkid.
The group’s musical style, fashion sense and origins have drawn comparisons with The Black Eyed Peas.

After honing their skills through a series of experimental projects, Mykie Toni and rappers Shappa Man (then known as Young Kass) and Taio Tripper co-founded the group in mid-2009. Miss Karun and K’Cous later joined.
Current members

Camp Mulla started distributing their music through websites ReverbNation, SoundCloud and SoundClick for digital download. Their first official song, entitled Low, features J-Smiles and was popular amongst college students. It was introduced by radio presenter Eve D’Souza on Capital FM when it debuted on the radio.
Radio

Their first single, Low, got them their first airplay on the Kenyan radio scene. Their most successful song so far is their second single, Party Don’t Stop, which has received airplay on many Kenyan radio stations, including Kiss 100, 98.4 Capital FM, on which it has reached its Top 9 at 9 playlist, and Homeboyz Radio (91.5), hosted by G Money in the morning. The song peaked at number 2 on Capital FM’s Hits Not Homework and number 13 on Homeboyz Radio’s HitList.
On 21 September 2011, Camp Mulla had a live interview with Kenyan Kiss 100 host and vocalist DNG, where he asked the group why they do what they do, what their inspiration is, their goals in this music industry and all that motivates their style.
Public appearances and performances

Camp Mulla got their first public appearance on 12 February 2011 at Collo’s Valentine’s Day concert, where he was to reveal the music video for his new song, Chini ya Maji. At the same time, he was to introduce Camp Mulla in public to perform for the first time.

Camp Mulla was the opening act for Nigerian R&B duo P-Square at a live performance at The Carnivore on 26 February 2011. Camp Mulla also opened for Nigerian acts at Naija 9te (or Naija Nite) including Naeto C and Flavour on October 2011. They have also recently made huge appearances at hip-hop events, school concerts and award shows such as the Chaguo La Teeniez Awards.

The group were to perform in the Big Brother Africa 7 opening ceremony alongside J. Cole, Davido, Aemo E’Face, P-Square, Naeto C and Flavour on 6 May 2012 but were not able to due to delays in their travelling documentation. However, they performed on the show’s first eviction show on 13 May 2012.
Musical style

The majority of Camp Mulla’s songs incorporate hip-hop and contemporary R&B respectively. However, some of their tracks also indicate their producer K’Cous operates within a Kenyan state of mind, such as with their song Addicted. They call their musical style “2-5-Flow” or “254Low” (pronounced two-five flow), which is a pun on Kenya’s calling code +254. “254Low” is also said to be the name of their soon-to-be-launched multi-talented fraternity, which will feature young Kenyan upcoming artists believed to be the future of the newly reformed music industry.
VLADIMIR – light academy