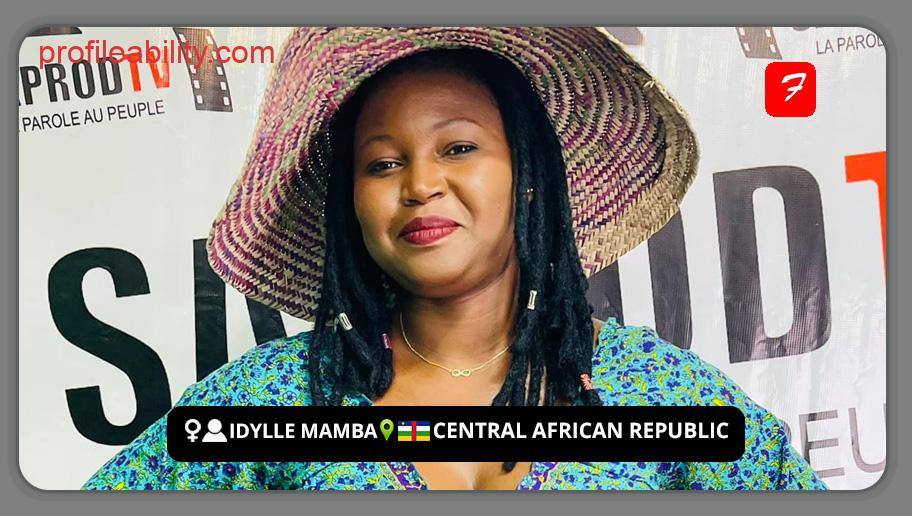 Idylle Mamba, whose actual name is Lydie Natacha Mamba Danga, was born in Bangui, the capital of the Central African Republic, in the year 1985. She is the youngest of 16 siblings.

Idylle Mamba’s music is a synthesis of Central African rhythms with jazz, blues, and Afro folk, which she refers to as Centrafik-Ailleurs, a new genre she established.

Her style is authentic, genuine, and vibrant, with a leaning toward the traditional-modern, or “Centrafrik-elsewhere,” as she likes to call it. Her works address global and serious issues such as injustice, war, exclusion, racism, and excision with simple and light language, honesty, and without conceit.

She started singing in a choir, just like her counterparts. She joined Focus Masseka, a female experimental music group, and won the Francophone song competition held by the Alliance Francaise de Bangui in 2003.

Riding high on her win at the Alliance française de Bangui’s French-speaking song contest, Idylle got a scholarship from the French Cooperation to integrate and study at the Music Hall of Toulouse in France between 2005 and 2007.

With her debut track “Sango et vous,” she built a reputation for herself on the Cameroonian and worldwide arena in 2010. In 2011, she received nominations for the RFI’s Couleur Talent and the Museke Awards in the United States for the song “Sango et Vous.” In 2013, she released her debut solo album, “Bêkou,” which means hope in Sango.

She was a finalist for the RFI Prix Découvertes in 2014, for the album. In March 2017, she was also recognized as the finest Central African artist at the Canal 2’Or Act 11 awards event, a category that includes both men and women who excel in the sub-region.

Music is everything to her; it’s like a love tale that hits you like a thunderbolt, a narcotic that captures you without you even realizing it, offering tenderness and sweetness to calm spirits wounded by a decaying world. As a result, she is now one of the most powerful advocates for peace in the African Central Republic.