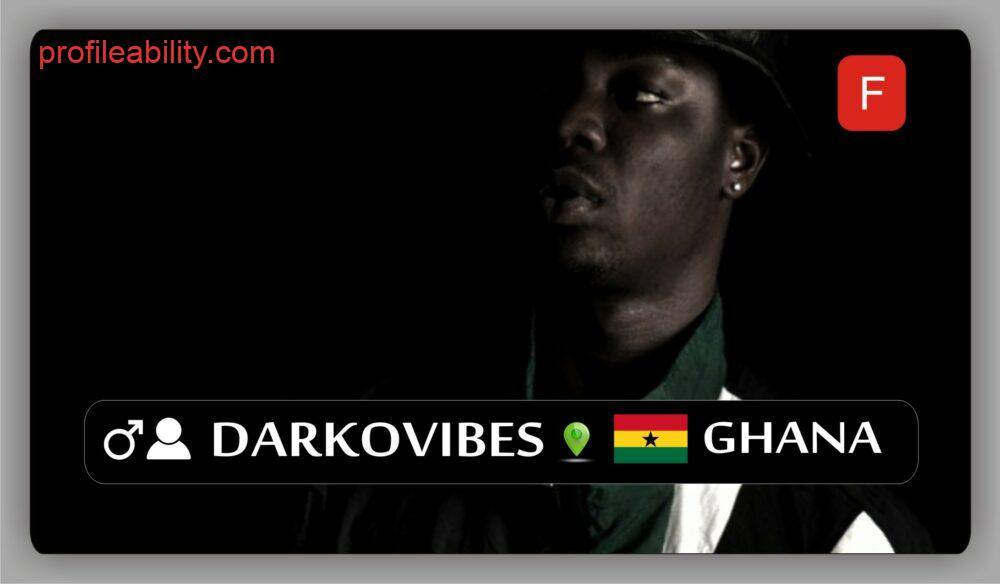 Darkovibes is an exceptional music artist who, like many others, came alive as a result of being around and experiencing the music creation process. After meeting his friend and producer “vacs” who worked in a studio at mallam, they began to explore music creation a few months after seeing how it’s done. From rapping to following trends , he abandoned what was conventional at the time in search of something more, a unique and personal style.

When Darkovibes decided to create music as a potpourri of Ga, Twi, pidgin and English (with the first two being local Ghanaian dialects) he was strongly opposed by his peers and immediate mentors. His exceptional drive, dedication, and brilliant ability to synthesize all four languages immediately became apparent to his critics. His blend of melodies, vibes and fun filled signature exclamations got him recognised by “illuminati” and “koene” hit making producer magnom.

The two collaborated to produce a couple of songs for telecommunication giant MTN before the launch of the MTN pulse campaign. His catchy sing along hook garnered a lot of fans and immediately became the object of admiration of big industry artistes like Joey B and Edem to mention a few. He tackles subjects such as love, passion and dedication in his music with consistency — a quality that will fuel him through the next decade and over. Although Darko is new to the music industry, his creative excellence is in high gear and produces some eclectic and influential work that captures the spirit of the time. Unfortunately for most people Darko’s career won’t be going anywhere soon. It has just began.

Nicolas Omar Diop, better known by his stage name Nix, is a Senegalese rapper and entrepreneur who was born on September 19, 1978, in Dakar. In 1993, he debuted as a member of the band Kantiolis, which was his first...

Ismaila, better known by his stage name Iss 814, is a Senegalese rapper from Baye Laye, Guediawaye, in the outskirts of Dakar. Ismaila grew up in a musical household, with three elder brothers who were all rappers and genuine mentors....

Jessy Kimbangi, aka Jessy Matador, was born on October 27, 1983, in Paris. He is a Congolese-French singer who began his career as a dancer in 2001. After four years as a member of the group "Les curs brisés" (The...

Hakill was born on September 22, 1991, under the name Ibrahima Khalil N'Diaye. Hakill grew up in Dakar's renowned Grand Yoff area, surrounded by music since he was a child. He raps in Wolof, English, or French, proud of his...

Tiki Seramed, aka Serge Saint Paul Abate Medjo, is a young Cameroonian Afropop/Afrobeats singer, rapper, composer, and performer. Tiki, a genuine talent with a beautiful and electrifying voice and a broad palette of vocal styles, was born on July 21,...

The Guissé pair make up the Senegalese music group Maabo. The vibrant Afro-pop style of the husband-and-wife duet is based on the couple's interwoven voices and the amorous tone of their lyrics. The pair sings in an Afrobeat-influenced manner. Mia...