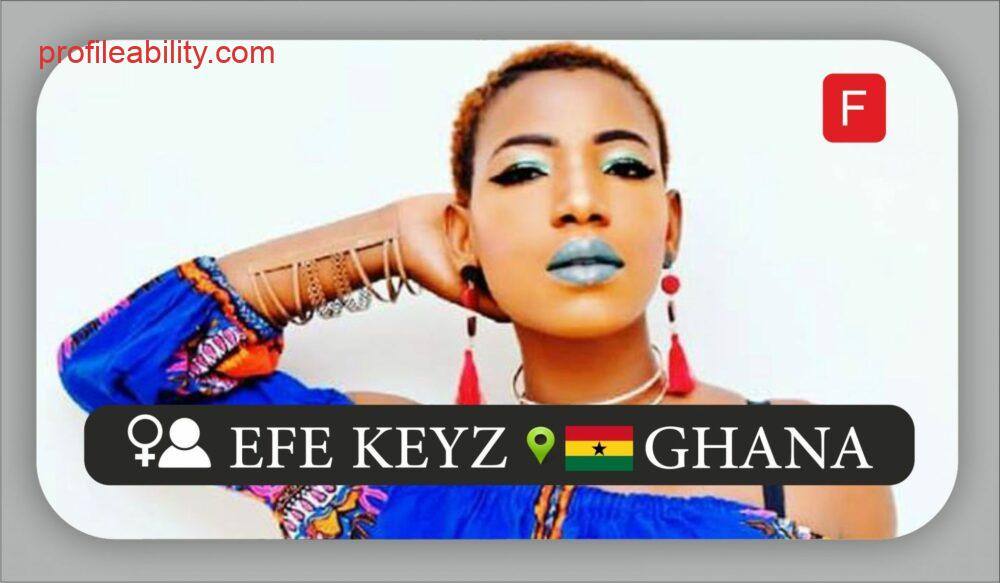 Ellen Ayensuaa Gyapong (born on May 17) better known as Efe is an Afro-Pop and Pop vocalist, performer, songwriter, TV presenter and former beauty queen from Ghana. The name Efe comes from a part of the Western Region and is given to girls born on Friday.

Music touches us in many ways and produces different reactions. For Efe, it became necessary to express herself with music by addressing issues such as life, love, marriage, and heartbreaks. Efe does her music in local languages in addition to English.

She completed Kwame Nkrumah University of Science and Technology (KNUST) with a degree in Sociology. As a writer, she is intelligent and good at addressing problems that arise in daily life and how they can be resolved which she incorporates into her lyrics. Efe draws her inspirations from her environment and seeks to create music that will motivate, inspire, kindle and make people happy. Her undeniable inspired fusions are influenced by Brandy mostly, the Osibisa Band, Emeli Sande and with recent likes to Wiyaala.

Efe loves live band and have performed live band shows including ones with the Shakazulu Band and Chico Band among others. At the World Music Day concert recently held at Alliance Francais, she performed much to the admiration of the patrons and became the talk of the show. Efe was also selected among the top 20 acts for KLMSingAloud Talent Competition on Viasat 1.

She hopes to collaborate with some of Ghana’s top artiste as well as international acts, especially from South Africa during the course of her musical career.

Efe’s debut single titled ‘Meye Obaa’ featuring Donzy of Crusade fame sheds light on African women limitation to choice of men due to our culture and is expected to be released in July. Also in the offing is an Extended Play [EP] yet to be released that will cut across genres that have not been exploited yet in Ghana.

It is time to listen to something refreshingly different from Efe the talented songstress.