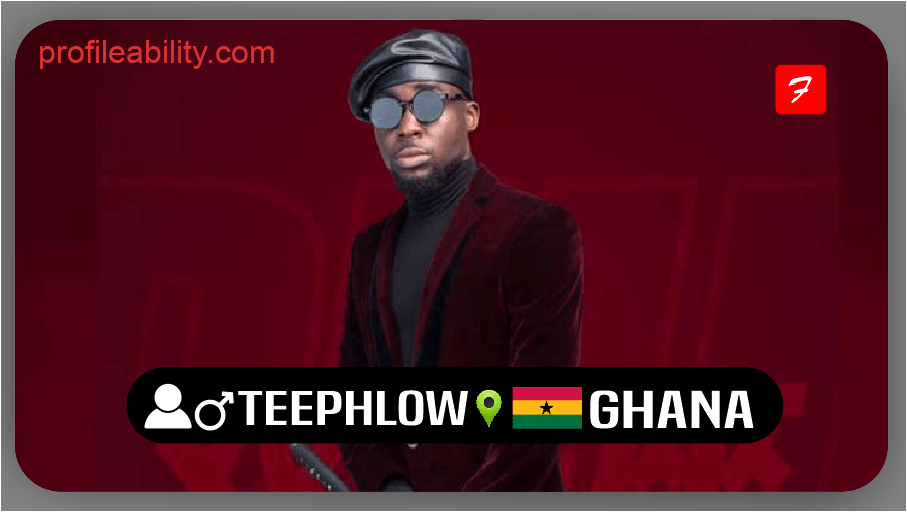 He was first noted at the maiden edition of the 2012 “Next Big Thing in GH Hip Pop” Talent Hunt Show. He released his debut single, The Warning, in 2014 featuring Sarkodie.

Teephlow last of six children was born in Kotokuraba, a township in the Central Region capital Cape Coast to Mr. Mohammed Baidoo an educationist, and Mrs. Khadija Baidoo, a businesswoman. He attended Ekumfi T.I Ahmadiyya Senior High School and earned a BSC in Quantity Surveying and Construction Economics from the Kwame Nkrumah University of Science and Technology.

Teephlow began his music career in his tertiary days, rapping on-campus and building a strong fanbase at the Kwame Nkrumah University of Science and Technology. He gained national recognition during the Maiden Edition of the “Next Big Thing in Gh Hip-Hop” where he came out as the first runner-up. He was signed by Ghanaian producer Hammer of the Last Two Music Group, after the talent hunt show.

He had the first taste of exposure when Hammer featured him on Kwaw Kese’s song “Swedru Agona” and released his first single “The Warning” under the Last Two Label in 2014.

Teephlow is currently with TeePhlow Music/Revolve records which is his own creation and is managed by his blood brothers Ibrahim Kwame Baidoo ( Artist Manager) who has been his road manager since 2013 and Hameed Baidoo ( Brand and Creative Development). He has Kwame Asante as his official DJ and Elorm Beenie as the project publicist.

In 2017, Teephlow released his debut tape “The Phlowducation EP” with Production from SnowBeatz, Possigee, Carl Zeus, Two Bars, and Seshi as well as guest appearances from Reggie Rockstone, Edem, Epixode, FlowkingStone, Worlasi, BigBen and Novo. The EP which was launched at the Coconut Grove Regency Hotel in Accra.

Teephlow won his first award, “Record of the Year” from the 8th song “State of the Art” of the Phlowducation EP at the 2018 Vodafone Ghana Music Awards.

In December 2016, he parted ways with The Last Two Label and signed a 4-year management deal with Spyder Lee Entertainment.

However, he’s currently under his own creation by the name TeePhlow Music/ Revolve Records.

Freebie Fridays . Bigups to @anees on this beautiful record.

Stay Focused and Have a blessed New week !! #NewYearNewEnergy #Phlowducation

This is The Ten Hag Era!! This is The United we signed up for!! ⚽️🕺🏾🦾😂UNitedForever #ManUTd

Realest Reality #6feet for us all

The Price Changed but i didnt!! #Pricey #Goddid