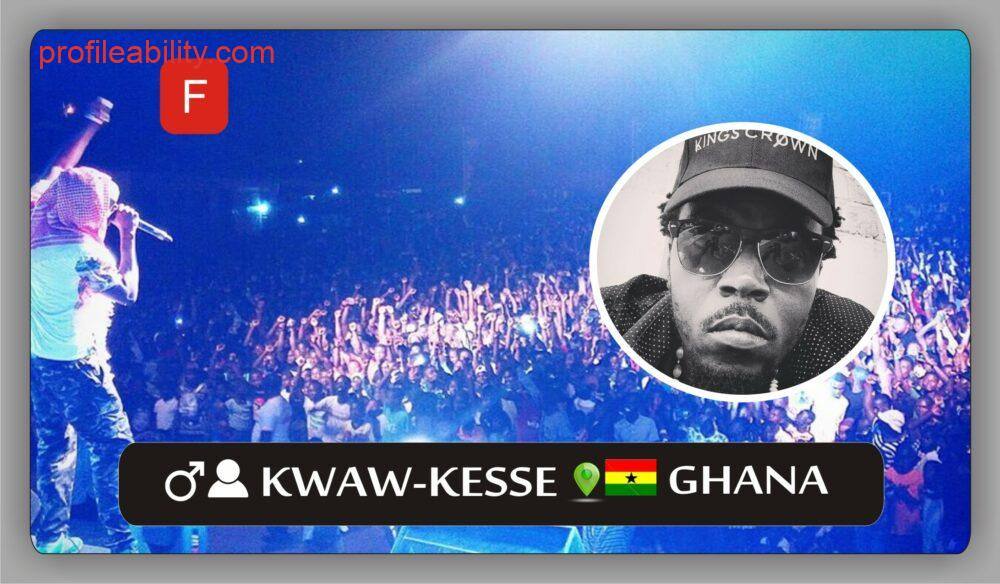 Born Emmanuel Kofi Botwe at Agona Swedru, in the Central Region of Ghana, Kwaw Kesse was inspired by his poor family life and these has always reflected in His songs.
Kwaw Kese started writing songs and performing at age 14.

In 1998 after Kwaw Kese has completed senior high school,He got a job as a meter reader for the Electricity Company of Ghana. With low level of interest for the job, He intended to take music serious and more personal. Kwaw worked with E.C.G for three years.
He then left to the city, Accra, to seek for his dream. In 2004, He met the dream producer, Hammer of the Last 2, and was welcomed into the last 2 label.
Later 2004, Kwaw had his first single “Eye Nonsense” on a compilation Album “The Execution Dairy”, and it was an instant hit.

In 2005, Kwaw released his second single “Matsewo Kwakwa” on another compilation Album “Sounds Of Our Time” and it was a hit.

He then founded His own Indie Record Label, MAD-TIME ENTERTAINMENTS, LATER IN 2005.
Kwaw Kese released His first Solo Album “Na Ya Tal” with the popular slogan ‘AboDAmmm’ which is a Streets slogan in Ghana.

Kwaw Kese likes to do Charity, and has done a lot of that in Ghana.
Has also Adopted a Ward at the Panthang Mental Home in Accra, now the KWAW KESE WARD!!!
Kwaw released His third Album “Give Way” which was nominated for MTV MAMA Awards in 2009.
And has recorded songs with Wyclef Jean, 2Face Idibia, Professor J of Tanzania, Sarkodie, Brymo, Memphis Bleek, Rell and a whole lot of top Ghanaian superstars. In 2012, He released “Untold Stories” his fifth studio album after many singles and collaborations. He also released the second version of Untold Stories in the US dubbed “Untold Stories 2”.
Kwaw has featured in top magazines like The Source, Fader Magazine etc.
And has been featured on BET Internationals’ popular feature “its my thing”