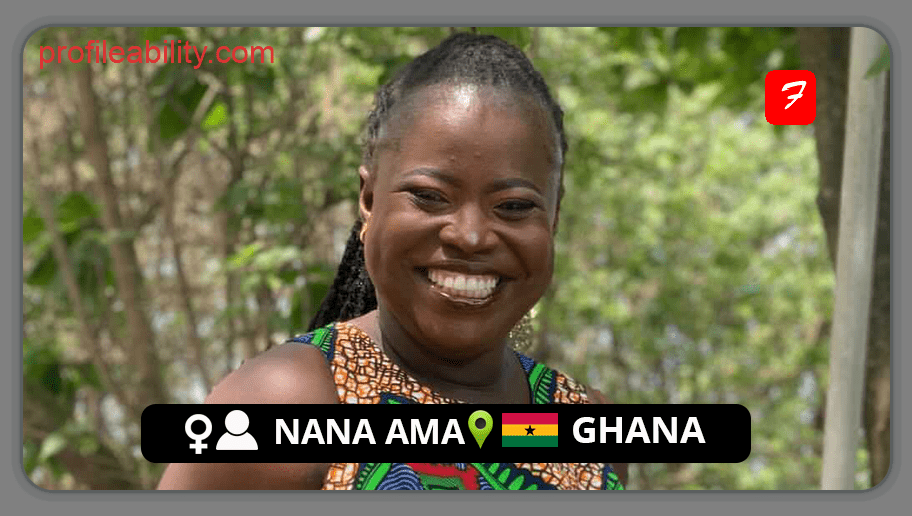 Anna Nana Ama Dadzie is a veteran Ghanaian backing vocalist, composer, and singer professionally known as NANA AMA. In 2021, she was honored by the 3Music Awards Women’s Brunch for her contributions to Ghana music over the past decades.

Nana Ama was born in Accra, Ghana. She had her secondary school education at Winneba Secondary School and was also a student at the National Symphony Orchestra Ghana.

She performed on songs like Okomfour Kwaadee’s Abro Ne Bayie , Lord Kenya’s Medo which earned four awards including ”Song Of The Year” at the Ghana Music Awards in 2002

Nana Ama started singing at a young age, she found herself under the mentorship of Nesbit Hanson Addy to become a voice-over artist and recorded radio jingles in 1999.

After her training, she graduated herself as a full-time backing vocalist and worked with several record producers like Zapp Mallet, Morris Babyface, Jay Q, Sami Helwani, Sarge, Hammer Of The Last Two, Bodo Staiger, Colter Harper, Kaywa, and other renowned sound engineers in Ghana.

She performed on songs like Okomfour Kwaadee’s Abro Ne Bayie , Lord Kenya’s Medo which earned four awards including ”Song Of The Year” at the Ghana Music Awards in 2002, same with Buk Bak’s Klu Blofo song which earned them the same category in 2003. She played for the Rex Omar & Nu Ashante band led by Rex Omar, The Herbalist Band led by Blakk Rasta, and Goodies Music International Band as a member.

Nana Ama is currently the Public Relations Officer of the Ghana Background Vocalists Association (GHABVA) and was honored for the first time by 7DS TV and 3Music Awards.

As a backing vocalist-In a news article published on Ghanaweb, she has worked with this various artists on this various songs:

Nkasei – Wo Kon Do Anaa

Top Radio Jingle 1999- Where Others Cant See , We Can See

ONE ON ONE WITH NANA AMA | DAYBREAK HITZ

Up N Close With Nana Ama , Background Vocalist on ShowbizNow

Nana Ama - Welcome To The World Of Nana Ama