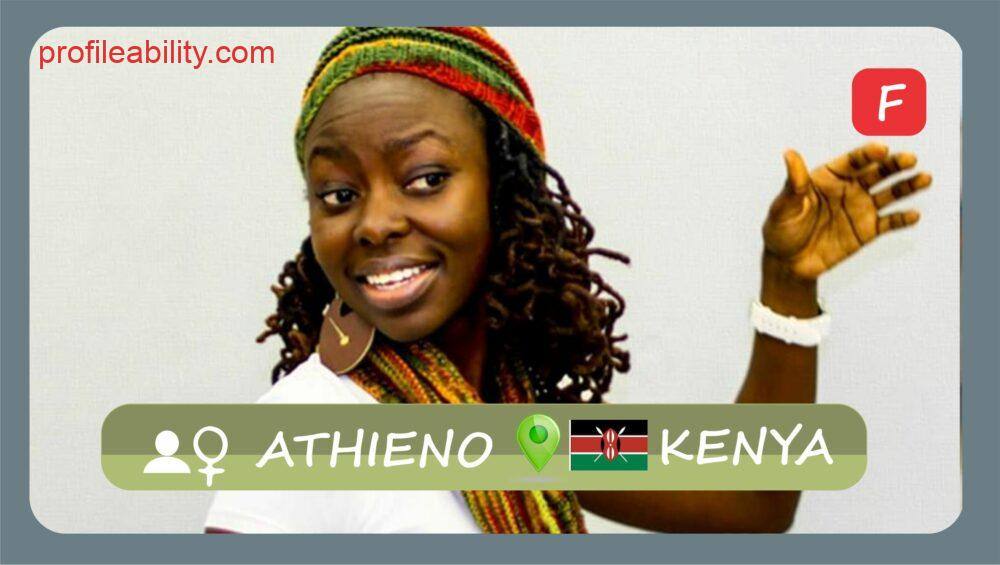 Athieno real name Annette Athieno Oduor is a Kenyan Musician. She began singing as a toddler and was performing by the time she was two years old. Growing up in a musical household in the heart of an African city, she was exposed to a myriad of cultures and musical traditions. Athieno’s love of fusing the various musical styles (Western and African) that coloured her upbringing was evident by the time she was writing and producing as a teenager. In 2009, she released her first production, Mwanamuziki. Drawing on her experience in East and Southern Africa, Mwanamuziki presents her take on a “Swahili-laden socially-conscious neo-soul sound.”

Over the next few years she went on to perform in Kenya and the U.S. at Kinanda Arts Festival, Jamaica Plain Porchfest, Harborwalk Sounds Boston, and became the first Kenyan to perform at the African Festival of Boston in 2012. By 2013, she had racked up an enviable resume with a slew of a cappella cover songs including and “awesome rendition of Just A Band’s Probably for Lovers,“ and “a brilliant tribute to Mercy Myra,” inspired by “one of the most beautiful renditions of the National Anthem.” In 2013, she released her song Sukuma Wiki, a complex pattern of Luo, Swahili and English that earned her a spot as a finalist in the 2013 International Songwriting Competition. Her song, Fire, a funky, fiery love song produced in collaboration with world percussionist, Moez Dawad, followed in 2014. The two songs showcase Athieno’s ability to unite story and song, weaving multiple languages and instrumental colours into her Africa-infused urban sound and demonstrate her poetic gift for setting a scene.

She achieved all these under the moniker annieSoul. However, while in the U.S., she was exposed to musicians and cultures from around the globe and gained a renewed curiosity about African music traditions. “Over the last several years I have had the privilege and honour to share the gift of music as annieSoul. In that time I have grown significantly and gained a renewed sense of purpose in my mission as an African artist. With this new take on life and music, I have chosen to reclaim my middle name, Athieno, which more accurately represents my musical journey.” With this new direction, and the stellar collection of genre-bending musicians that she had met while in the U.S., Athieno produced her album, I am. The result is a culturally rich work of “art that is at its core honest, cosmopolitan and inventive.” Upon its release, I am “instantly positioned itself as a strong contender for the best Kenyan album of 2016.” Muamuzi, the final track on the album, was considered one of the top 10 songs of 2016 by Bottomline Kenya.

Athieno - Way Back (Live in Nairobi)