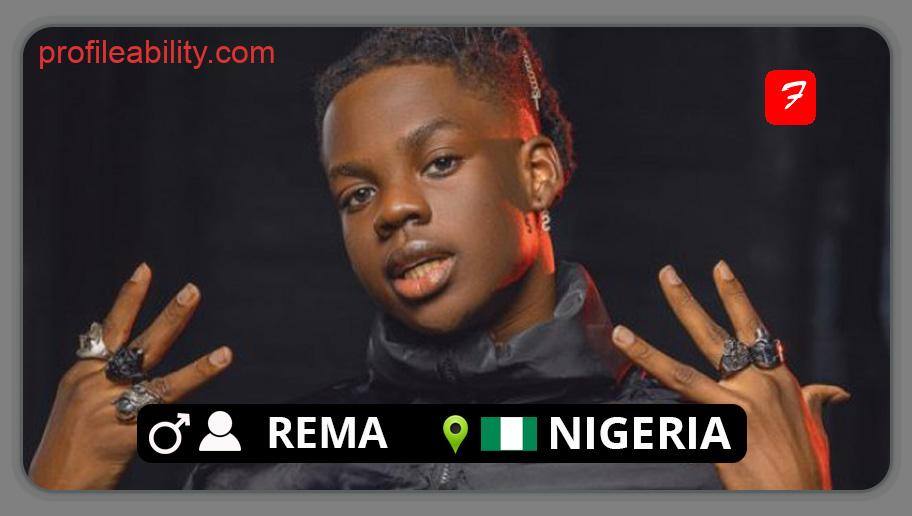 Rema is Nigerian hip-hop and afrobeat artiste. His real name is Divine Ikubor. Rema was born on 1st May 2000 in Benin City, Edo State, Nigeria. He was born to Mr Justice Ikubor. He had his basic and secondary education all in Benin City.

Rema rapping in church and school while very young. Rema got discovered by D Prince after he did a cover of D Prince’s Gucci Gang. The freestyle led to D Prince getting him signed to Jonzing World by D Prince and Mavin Records of Don Jazzy. He released his debut EP, Rema which topped Apple Music in his country, Nigeria after its release. He has had other hits such as Dumebi(which topped charts even in other countries), Ginger Me, Spiderman, Iron Man, Spaceship Jocelyn, among many other hits.

Rema prefers to call his sound Afrorave which he says fuses Indian and Arabian sounds with African beats. In 2020, he released his debut album, Rema Compilation.

He has had many nominations and awards such as Viewer’s Choice at the 13th edition of The Headies in 2019, Soundcity MVP Awards for Best New Artist in 2020, and a nomination at the 2020 BET Awards for Viewers Choice Best International Act

Welcome to the crib in Parí 🏡

Rema - Are You There? (Official Music Video)

Rema - Are You There (Official Dance Video) by 1kenna & TM Greatness

Singing for my sweet Melanin 🌊

Straight outta BC, we taking the sound to the world you see 😁✌🏽

Jason Derulo taught me how to dance 🤣 #CalmDownOnShorts #challenge