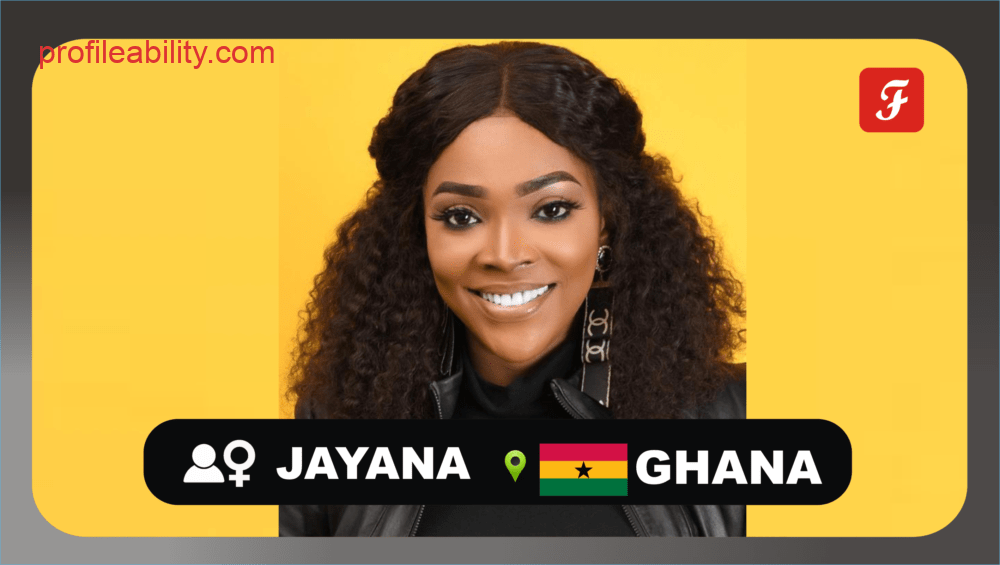 Born Jemima Annor-Yeboah on August 25, 1983. Jayana is noted for her soul-touching ministrations, making an immense impact on followers of gospel music.JAYANA’s singing is exciting and breathtaking. She is noted for her mesmerizing and captivating vocal. She is a musician who uses the voice as her instrument, displaying precision and agility, mixed with heartfelt emotion.

Created as an instrument to bless God’s people through worship, Jayana strongly upholds as her credo that as a worker of God she is the salt and light of the world. Jayana’s formative years were spent soaking up the contemporary gospel, and praise and worship. She is the second daughter of the Late Bishop Dr. Augustine Annor-Yeboah, founder of Christian Praise International Centre (CPIC).

“I’ve realized that in this industry I need to be determined and focused, and with the favour of God, I know that I can make it”

Born in Accra, Jayana’s musical career started at the age of ten [10] and she has since blossomed into a gem. Jemima believes that her talent is hereditary. Her father used to be a choir boy many years ago. She participated in the maiden edition of the Stars of the Future talent show, competing with the likes of Irene Logan, Jean now Efya, Ramzy Prince Amui, and others.

Jayana’s recording career after ‘Stars of the Future’ began on October 29, 2006, when she launched her maiden album, ‘Awurade Ani Wo Meso’ which was produced by Mr. Micheal Nti under Multi Trade Impex label.

Ewurade ani wo meso is a collection of soul-inspiring songs with titles, such as Abraham Nyame, Obarima Yesu, Onyame ho ye hu, Ma hwihwe no, and Wo tumi so. The album is categorized into three – prayer songs, worship songs and songs of praise. And these are meant to satisfy the diverse interest of gospel lovers.

JAYANA took a breather from the music scene after the Stars of the Future reality show in 2006. As one of the best contestants in Stars of the Future Reality Show much was expected from Jayana after the competition but she decided to take a break in music at a point. Her inability to advance in her music career was because she and her team were novices in the industry. She took a break to learn more about music and set up her personal business to support her music career.

Jayana announced her comeback into the music space when she was signed on to DAVEJOY Music Records in December 2018 [Record label owned Joyce Blessing’s Husband] and released a new song titled VICTORY in 2019 featuring Joyce Blessing.

The promising gospel minstrel is currently not signed to any label. She was part of the backing singers for Gospel artists like Grace Ashey, George Agyei and others.

She was nominated in the Best Vocalist category in Ghana Music Awards after releasing her first album in 2006. Jayana was among the finalist of the first season of the Stars of the Future competition. She also earned nominations in the following categories, Gospel Song of the Year, Gospel Artiste of the Year, Most Popular Song of the Year, and Best Collaboration of the Year at the 2019 Emerging Music Awards.

Jayana was a guest performer at the Ghana Music Awards Festival [Industrial Awards night] held at the La Palm Royal Beach hotel in 2007.

On 22nd June 2020, she was officially announced as a Judge on Praiz Season 3, a music reality shows that develops the talent of young and passionate musicians. She was assigned to a number of contestants to guide and mentor.She was adjudged the Female Vocalist of the year at the second edition of Ghana Urban Gospel Music Awards [GUGMA].The ‘Victory’ hitmaker beat competition from Efe Grace, Celestine Donkor, Alexandrah and Pastor Dzifa.

LIFE AS A COSMETOLOGIST

JAYANA is a versatile woman and due to her diversity, she is not just a gospel musician but also a businesswoman who owns a Beauty Company at Dome-Pillar 2 where she trains ladies for free through her Jayana Free Training and also has a beauty school named Jayana Beauty Salon and Academy.

Over the past nine [9] years [2011], Jayana Beauty Salon and Academy has trained over two hundred [200] young women for free in courses such as Bridal makeup, glamour makeup special effects, editorial makeup, and Day make up evening makeup. She shows love to the less privileged in the society on Father’s Day and Mother’s Day every year.

The gospel minstrel teams up with Support A Mother Save A Child Foundation to organize a free breast cancer screening in October every year for the community.

Watch; JAYANA’S FULL PERFORMANCE OF her latest single “HE REIGNS ” at @actionchapelgh

JAYANA - At His Throne [Medley]

JAYANA'S KARA EXPERIENCE WAS A SUCCESS

JAYANA singing for her biological sister ADUHEMAA, at her white wedding 💍❤️.