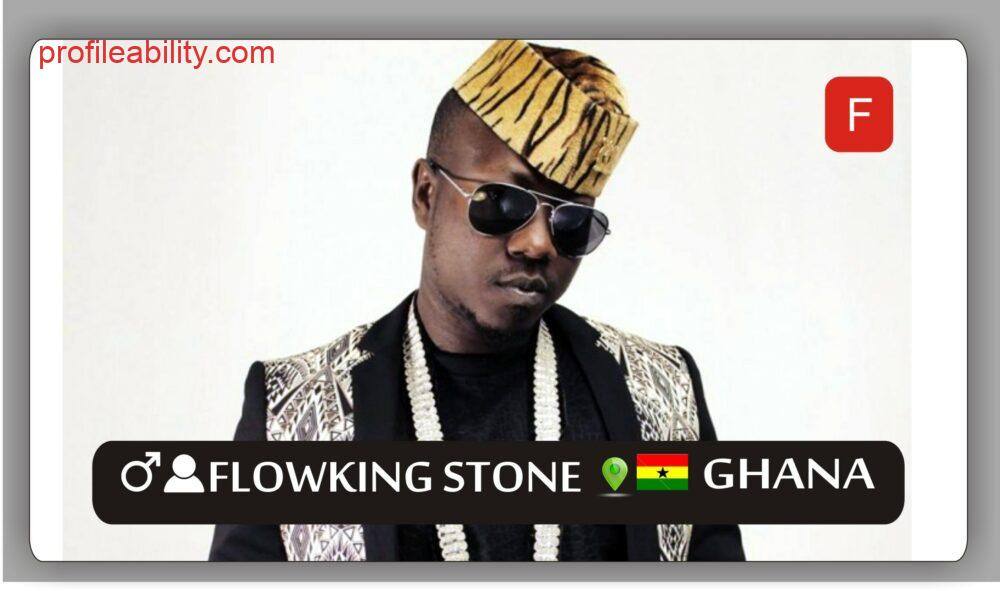 Kwaku Nsia Boama Known by his stage name as Flowking Stone is one of the sensational Hip-Life rappers hailing from Kumasi in the Ashanti Region, The undisputed rapper had formerly belonged to a duo team called BRADEZ BRADEZ was a multi-talented musical duo, made up of the two blood brothers by the names of Kwaku Nsiah-Boamah (Flow King-Stone) and Kwaku Nsiah-Amankwah (Kunta Kinte)

Flow King-Stone is a BSc Bio-Chemistry graduate of KNUST (2007) and Kunta Kinte is a Social Science student at the University of Ghana (Legon).

They’ve been a versatile musician who had mastered the art of rap, singing, showmanship, keyboard playing thereby had dedicated to releasing quality music to inspire and promote joy and happiness in their cherished listeners. They were hence referred to as one of the ‘Most Talented Rappers in Africa’.

They had released their hit album called ‘Conquer the world with tracks including Nana Ama, Ego bee, Wossop and Wossop (Remix ft. Kwaw Kesse), Ye ko yanim, Blow ya mind, Me do me Ghana, Life, 21 salute (ft. Stonebwoy), and other wonderful tracks.

They had featured some of Ghana and Africa’s finest musicians and artists such as Kwaw Kesse, Edem, D Black, Stonebwoy, Jai Amore, Dr Kwame Nkrumah, Sarkodie, Dr Cryme, Dampoo, RnM, 9ice (from Nigeria) and a few more both local and international acts. Bradez has performed on several big stages both at home and abroad and with the hits they have recently released including one gallon and simple.

Flowking stone had gone solo during an unfortunate illness that occurred to his brother.

“ I know some people may think I am being selfish and leaving my brother behind but my solo project does not mean we are going our separate ways.

“ After he fell ill, I had to slow down for a while.  But I realized that it will be better to come out and still be relevant in the music industry than to wait for Kunta and we all disappear into oblivion.

“It was not very comfortable deciding to come out on my own but we can’t let the name Bradez die. It is a difficult situation but we have to deal with it. We have discussed it several times and we decided it will be good for us to remain active in music and to keep the brand alive than let it die.

“ I have moved to Accra to work and Kunta is in Kumasi with our mum and that makes it difficult to work together as a team. Yes, sometimes he comes around or I go over but we can only do so much. We couldn’t create songs together like we usually do. Sometimes, he wouldn’t be around to finish what we have started.

“ We are however working on an album together and we are just waiting for him to fully recover then we will release it. That project will come off after my solo project.

“ He is my blood brother. It is a family thing. I feel I represent Bradez. Yes, Gifted is just about me but it is still from Flowking of Bradez.  I think coming out now will work out well for both of us in the long run.’ ∼ Flowking Stone

[…] Kwaku Nsia Boama Known by his stage name as Flowking Stone is one of the breathtaking Hip-Life rappers hailing from Kumasi in the Ashanti Region, The undisputed rapper had formarly had a place with a couple group called BRADEZ was a Multi-capable melodic pair, made up of the two kindred spirits by the names of Kwaku Nsiah-Boamah (Flow King-Stone) and Kwaku Nsiah-Amankwah (Kunta Kinte) […]

[…] Kwaku Nsia Boama acknowledged by using his level name as Flowking Stone is one of the sensational Hip-existence rappers hailing from Kumasi inside the Ashanti place, The undisputed rapper had formarly belonged to a duo crew referred to as BRADEZ BRADEZ changed into a Multi- talented musical duo, made up of the 2 blood brothers through the names of Kwaku Nsiah-Boamah (drift King-Stone) and Kwaku Nsiah-Amankwah (Kunta Kinte) […]