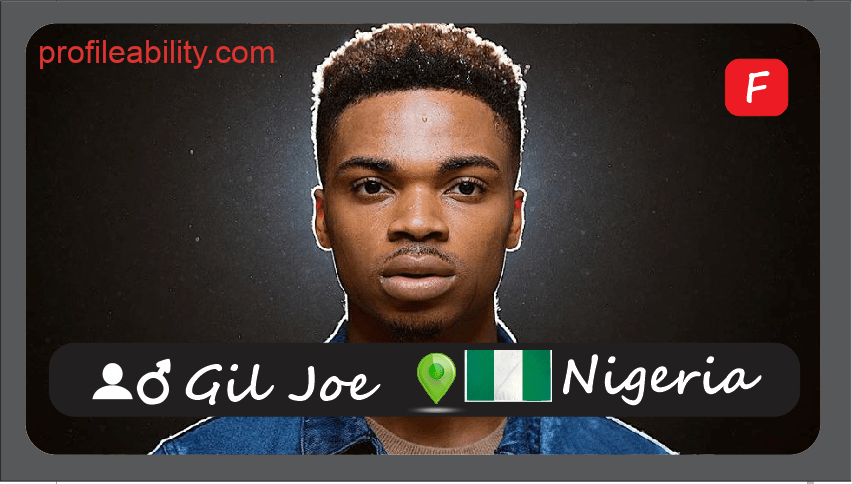 It’s been such a consistent Music journey for the Nigerian Afro Gospel and Christian Baller Gil Joe, as he has recorded a high-level fan base at his young age as a Musician and a young Entrepreneur.
It all began when he gave his life to Jesus Christ in 2009.  Gil Joe started producing Music at the age of 17 when he worked as a Personal Assistant to one of the best Gospel Producers in Africa A4jeazy. With his commitment and passion, he was able to acquire his production skills and knowledge within a space of 11 months, after which he produced an unreleased song titled Better Dayz featuring Soltune; little did he know the song will kick start his career as a recording artist.

In December 2013, Rocketown Records, owned by the World renowned Gospel Artist Frank Edwards approached Gil and offered him a proposal to be a member, and he officially joined the movement. It was indeed a big move for his career as a young Musician and Music Producer.
Gil Joe released his first single Elshadai featuring Frank Edwards, on the 21st of May 2014.

The beautiful piece of work produced by Frank Edwards brought a lot of attention to Gil’s style of Music and was described as ‘unique’ by many from different parts of the World. A few months afterward Gil Joe stunned the World with an Afrobeat cut titled Superstar remix. This amazing song brought more attention to the young lad, as fans were amazed at the out-of-the-box kind of sound Gil was creating.

Following up Superstar Remix was another beautiful Afrobeat tune titled Thanksgiving. A follow-up track, Rain featuring Frank Edwards, which showed the RnB side of the young budding act was released weeks after. The Year 2014 kicked off with a surprise for Gil Joe‘s fans, as he released his first self-produced track “Ryde”. It was such a memorable day, as fans from different parts of the World couldn’t stop talking on social media about how much they loved the sound and commending the Act for the great work.

Later in the Year, another major Record was released, produced by Gil Joe‘s alter ego, Yang Billie. This amazing record brought about the unique moniker attached to Gil Joe‘s brand to date; Christian Baller. This hit track which went straight up to No1 on the top radio charts in Nigeria and beyond, speedily became a World hashtag for well-dressed and properly living Christians in different parts of the World and is obviously a trend word among young people today as Gillians from different countries prefer to be called.

The young entrepreneur’s style also became a trend as many young folks aimed to dress like Gil Joe. This brought about the inspiration in launching his own fashion brand Gilbert Joph (formerly Gil Apparel). The fast-growing business sold out her first collection Christian Baller and is gradually becoming one of the biggest brands in Africa today.

The Year 2015 began with yet another beautiful Hit Afro-beat tune, titled “Eledumare”, making Gil Joe one of the first Gospel Artists to be acknowledged by one of the biggest Network Music platforms called the “MTN Y’ello Countdown”, putting Gil Joe‘s music to a bigger audience alongside other Artists in Africa. The amazing response to the song “Eledumare” was striking as it led to shooting Gil Joe‘s debut Music Video.

The Glory was released a few months afterward and then Mayo, a beautiful acoustic track, followed suit. The video for Mayo was released in September 2016.
The highly anticipated and talked about track “Far and Wide” featuring fellow signee, Nkay, was released shortly before the visuals for Mayo premiered.
Gil Joe is currently working on His self-produced debut Album, which has been very much anticipated and it’s finally set to be released later in the year 2016.

Reservations are free on www.afrogospelfest.com

Highlights of the Afro Gospel Fest with Gil Joe in Montreal Canada!!🚀🚀🇨🇦

A snippet of Gil Joe’s verse on JAH ft Frank Edwards to be released this Friday!!

Gil Joe and Frank Edwards in the studio working on “JAH” to be released 28th of Oct!!

BTS for Gil Joe’s new single ‘Made Whole’ out by midnight - 24th of June.