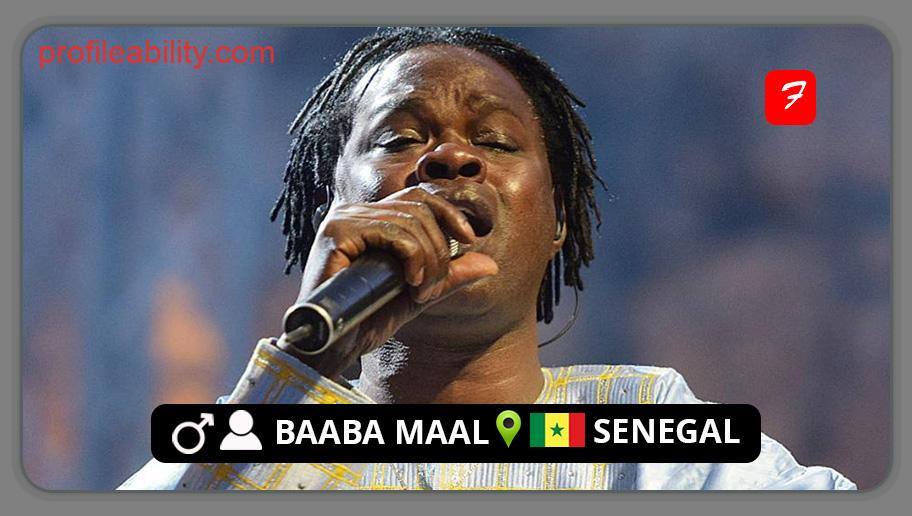 Born Baaba Maal on November 12, 1953, in Podor, Senegal. Baaba Maal is one of the most renowned Senegalese singers known for his unusual combination of native traditional African rhythms and Western melodies. The singer/guitarist sings primarily in Pulaar. Maal dedicated himself to learning music from his mother and his school’s headmaster. He went on to study music at Dakar University and later joined the Beaux-Arts in Paris, France on a scholarship deal.

In 1989, Maal recorded his first acoustic album ‘’Djam Leelii’’ with Dande Lenol band in Paris featuring the rhythmic guitar playing of Mansour Seek. Since the publication of his debut album in the late 1980s, the talented artist has developed a diverse sound that combines Afro-pop, dance, worldbeat, traditional Senegalese music, folk, and desert blues.

With his ‘’Firin’ in Fouta’’ album in 1994, Maal’s fusions continued into the next decade, as an album notable for its merging of apparently unrelated musical styles such as ragga, Celtic, and Breton harp music, Cuban rhythms, and electronica. As a consequence of the record, Senegalese artists Positive Black Soul launched their careers, and the Afro Celt system was born.

At the 1996 Grammy Awards, Baaba Maal was nominated in the Best World Music category for his song “Firin’ In Fouta.” Baaba Maal has also contributed to the music of the film ‘Black Hawk Down,’ and has performed at a number of international festivals, including Bonnaroo, the Sierra Nevada World Music Festival, and the Harare International Festival of the Arts, among others. In addition to his numerous solo albums, he contributed two tracks to the concept album, “Bushes” and “Dunya Salam.”

In July 2003, he was appointed as a UNDP Youth Emissary. Baaba Maal’s 2016 album The Traveller received positive reviews from outlets such as The Guardian, NPR, and AllMusic. He voiced the Wakandan soundtrack to Ludwig Göransson’s Black Panther.

Baaba's message about the tragic events and massacre in Mali - English

Mumford & Sons, Baaba Maal - There Will Be Time [Official Lyrics]

Baaba Maal – A song for Women