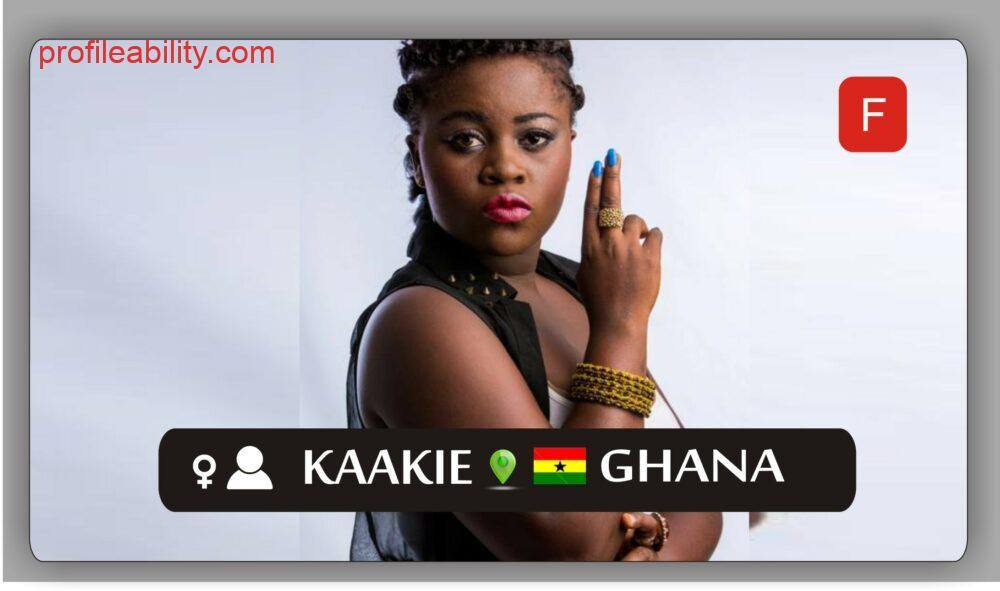 She grew up as a music lover who listened to various genres of music until and did karaoke versions for many of the ones she cherished.

When in the University, an opportunity came for her to feature in one of the reality shows on TV called “Stars Of The Future”. She was part of the singing competition that run on Ghanaian TV for weeks; but unfortunately, she got evicted along the way (she was rated 5th). From there, she met up with renowned Ghanaian Sound Engineer/Executive Producer, JMJ Baby (Joshua Raphaelson) – courtesy Charter House – and she got signed to his record label – XTRA LARGE MUSIC

After she got signed onto the label, she dropped her debut single “Ewoo” which took the nation by surprise when it turned into a classic hit within a month after release. Big Ghanaian acts, Samini and Stonebwoy, could not stand ‘the magic’ than to also jump on the same song to do remix versions of “Ewoo” which were titled “Papistic” (Samini & Kaakie), “More Pon More” (Stonewboy & Kaakie) and “Latex” with Edem.

Just when many thought Kaakie’s entry into the game was a “flash in a pan”, she dropped her second joint called “Too Much” which shot up to international prominence – even more than “Ewoo” – which she released earlier.

After dropping “Too Much” also produced by JMJ Baby, Kaakie had the opportunity to share stage with big Jamaican international singjay, Mavado on October 8, 2012 at the Accra Sports Stadium which pulled over 18,000 audience.

Kaakie, apart from being the biggest voice in Africa who does Dancehall music is also the very first female to combine Nursing and Music together. She was the first female in Africa to ever win a Reggae/Dancehall award.

On the normal, it is very scarce to find a female musician doing Dancehall in Africa or from Africa. But as in the case of Kaakie, she has stepped on the scene as not only Ghana’s first female act to take Dancehall to the international stage but as well, on the records, Africa’s first female Dancehall artiste who has gained international prominence within a short period of just 16 months.

Kaakie’s songs by the records are on heavy rotation by DJs and Radio Stations across USA, Canada, the UK, Spain, Italy, Norway, Netherlands, Germany, South Africa, Kenya, Uganda, Tanzania, Nigeria, Sweden, Lebanon, Israel and a lot more. She currently pulls a Facebook fanpage over 57,000 and has over 22,000 followers on Twitter (@KaakieGH).