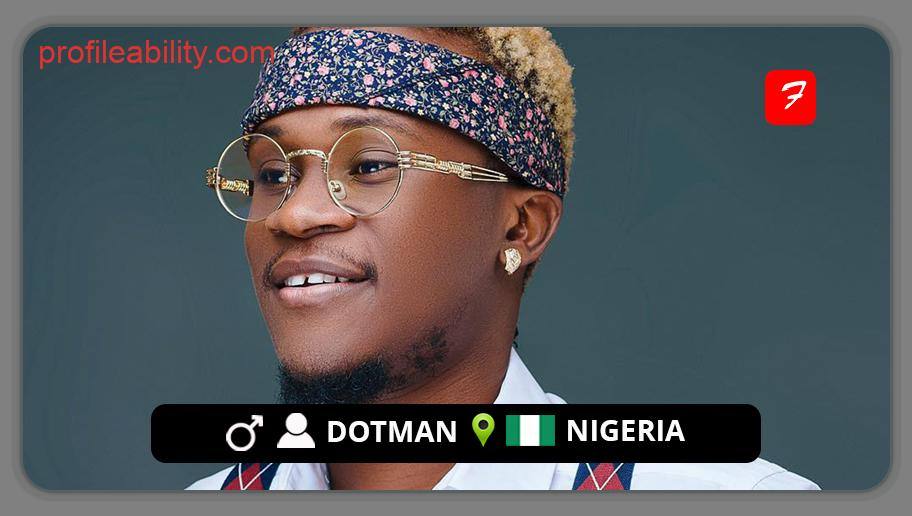 Dotman, whose real name is Olatunji Oladotun Alade, is a Nigerian Afropop/Rap musician famed for his smash track “Akube,” which propelled him to stardom. He was born on December 9, 1993, in the Nigerian state of Ogun, to Yoruba folks. He is the CEO of 808 Recordz and a singer, rapper, and performer.

Dotman grew up in the state of Ogun, where he finished his elementary school education before enrolling at Abeokuta Grammar School to pursue his West African Senior School Certificate. He graduated from the University of Lagos with a degree in Physics Education.

His passion for music began when he was a child, and he credits King Sunny Ade, Fela Kuti, Akon, 9ice, and Da Grin as musical influences.

Dotman’s propensity to use his distinctive voice with fluid agility to convey words and melodies with intense emotion is his defining attribute as a performer. The audio and visual release of his blockbuster hit single “Akube” exemplifies this talent more than anything else.

He traces the beginnings of his music career to winning a rap competition while a student at the University of Lagos. Following that, he got his first big label record contract in 2015, and released two well-received songs in 2015, “Yes Melo” and “Fine Girl.”

He quickly rose to fame in a short period of time and is presently creating waves in the entertainment industry. He was named one of TooXclusive’s “Artistes To Watch in 2017” and Vibe. ng’s “7 Breakthrough Acts to Watch Out For in 2017” in 2016.

Dotman was signed to Labo Entertainment, a part of the Labo Group, which is managed by Nigerian businessman Olabisi Akanbi, in 2020. He released the songs “Duro”, “Giveaway”, and “Tonight” under the label, and the album “Hakuna Matata” was released on February 5, 2021.

In May 2021, after spending a year with the label, Dotman returns to the post of CEO, pushing his craft ahead with his record company. ‘’On Me” and ‘’Drunk In Love” are two of his most recent hits.