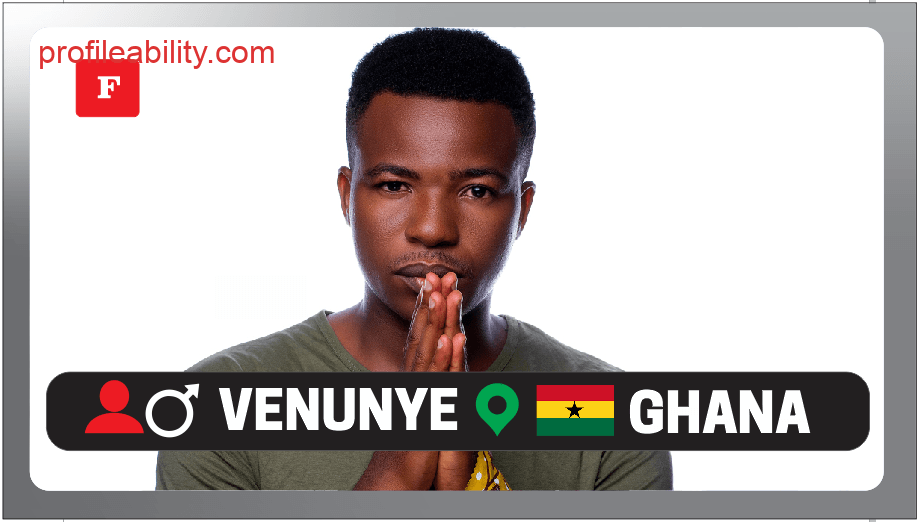 Venunye is a Ghanaian born Musician who hails from Ho the Volta regional capital. Born Teku Venunye Koku on the 14th of September, 1988. He developed the love for music since infancy and has always wished to develop music as his career in the future. Through hard work and consistency, he is living his dream now as an independent artist who is mastering his skill as a recording and performing artiste.

The growing vocalist started his basic education at Dora Memorial School Complex in Ho and completed at Jasico Demonstration School in 2003 at Jasikan . After secondary school education in 2006 at Awudome he continued to Mount Mary College of Education Somanya where he earned Diploma in French Education in 2011. He graduated from Valley View University with a degree in English in 2016.

Venunye in his quest for excellence and recognition on the music scene in Ghana and beyond has auditioned in 2013 for GLO X – factor singing reality show that was held in Nigeria. He came 40 out of the 15000 contestants. He subsequently auditioned for the MTN Hitmaker show in 2015 and was among the top 16 people that were initially selected for the contest.

He is currently promoting his singles and getting familiar with the music fraternity out there through shows and radio appearance in the Volta region and beyond. He has an ultimate dream of tackling some of society’s serious challenges through the power of music.

Venunye Be You (Lyrics video)

Venunye - I Still Love You

Venunye - We Are One (Peace Video)