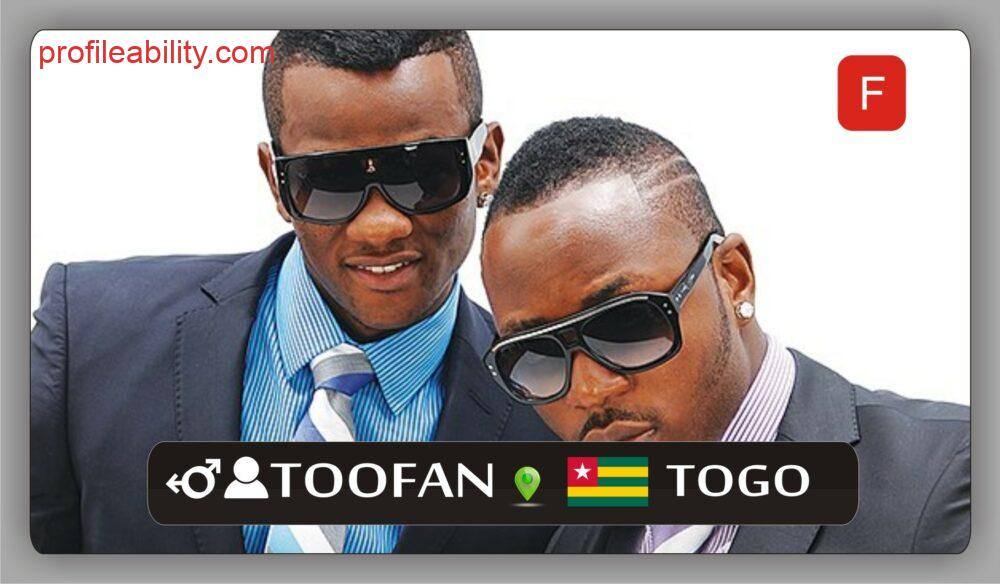 Barabas and Masta comes together to form TOOFAN. The are the young musical generation of Togo. Their musical style, which they call “the Ogbragada”, is a combination of Rap and urban music.

In 2005, TOOFAN launched their first single, “Epervier Ogbragada”, to support the national football team of Togo. It will be followed in the footsteps of “Epervier 2006”, always in honor of their team who had just qualified for the 2006 World Cup in Germany. The title remains on everyone’s lips and becomes the hymn of all Togolese fans.
So the group will fly to Germany to represent Togo at the World Cup musical shows. Back in Lomé, they released their very first album: Obragada 2006. A tobacco!

In the following year, he launches a second opus called Confirmation and to thank their fans, they organize a big concert at the Palais des Congrès in Lomé.

The performances are linked, the Togolese public is conquered. The TOOFAN then thirst for new horizons and decided to direct their career to the International. In October 2007, they launched the single ‘Parlé, Parlé’, which soon became a real hit, enabling them to afford the luxury of inviting the Magic System to their concert on December 25, 2007 In a Palais des Congrès of Lomé archi filled.

TOOFAN is undoubtedly one of the most promising groups on the African continent. The Ambassadors of Togolese music break the nail at the end of 2008, with “Attaquant”. The single that once again makes a hit in the charts, and gives them a good visibility on many French music channels.
.
Customers of the fact, Barabas and Master Just recur the following year with “Déloger” which leads their 3rd album, Business card, to the summits. He will remain number 1 in the Top Africa of Trace TV. Through this production, the group invites us to truly discover Togolese culture and wealth.

The Toofan remain, moreover, committed artists, as evidenced by the piece “A.I.M.E.S / AFRIQUE”, nod to the association of doctors for the promotion of education and health in Africa. More personal, with songs such as “La vie là-bas” or “Poches vides”, the Toofan do not hesitate to tell each other, to talk about their dreams and their hopes. So many messages to a young people in bad places.

Claudy Siar, himself (the most famous musical radio host in France), conquered, did not hesitate to become their godfather.

They are still gathering new scenes: again the Lomé Convention Center, then the Kara (city in the north of the country) before flying to the United States for a two-month tour before landing on the 02 February 2010 at the Zénith in Paris for the first part of Fally Ipupa, Toofan filled the 15,000 places of the municipal stadium of Lomé on December 25, 2009.

The group will be nominated to the KORA AWARDS in the Best African Hope category in June 2010 in Burkina Faso.

During the holidays of 2010 they were solicited everywhere in particular in Dakar, Cotonou, Abidjan, Niamey etc …
On 05 November 2010, they are invited to the RFI discovery prize in N’djamena in Chad as artists GUEST STARS. The 27th of the same month they will dislodge all the French capital (Paris) to the divan of the world. On the sidelines of this Paris show, they were also in several provinces of France among others Marseille, Toulouse and Lyon.

Nominated in the category Best Artist of West Africa (KUNDE d’OR 2010) with SYDNEY of Ghana and Dj ARAFAT of Côte d’Ivoire, they will be awarded the prize on 17 December 2010 by a jury composed of Imminent personalities.

The title “CE MAGIK” was again a huge success as well as “1truc de Fou” with high quality clips by the excellent director Jeff Attiogbé!

“AFRICA HOYEE” one of the last hits, chosen as the official song of the CAN 2012 has paced all the competition and continues to set the mood everywhere.

Creators of the concept of dance ” Cool Catcheé ” that vibrated the whole continent!

Since 2013, the group has launched a new dance called “GWETA” to “dodge the jealous”. A dance that has met with tremendous success in Togo and throughout Africa.