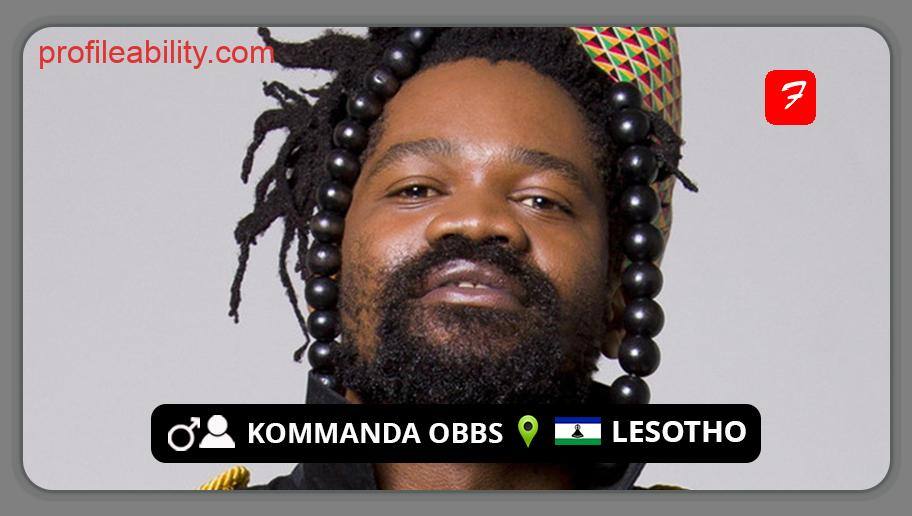 “The Lion of Basotho” alias Kommanda Obbs (the pioneer of Ts’epe-a musical sub-genre) is a sentient Sesotho ethnic Hip Hop lyricist/artist who aims to revive the language of Sesotho and promote key facets of the Basotho culture. He owes his humble beginnings to the dusty alleys of Maputsoe, Lesotho.

Obatia Lawrence Chapi was born on May 5th, 1986 and began creating his own songs after being inspired by artists like Bob Marley, Fela Kuti, Sankomota, B.O.P, and Trompies, Famole, Tupac Shakur, Tau ua Mats’ekha, and many more.

His rumbling and lyrical voice is his distinguishing quality, which his followers and the Ts’epe clan like. His deep voice, when mixed with his hard-hitting and rhythmic lyrics, sounds like a bell. His music is described as hard-core, stunning, compelling lyrics, and excellent vocals.

As he obtains notoriety across the continent, he is slowly becoming a cultural export. This musical treasure launched his debut EP KETEU (The Sound of The Bell) in October 2016, earning him a nomination for the 16th Metro FM Music Awards in the “One Africa” Category. The EP KETEU (The Sound of the Bell) confirmed Kommanda Obbs’ talent for blending the Mountain Kingdom sounds with urban current Hip Hop patterns.