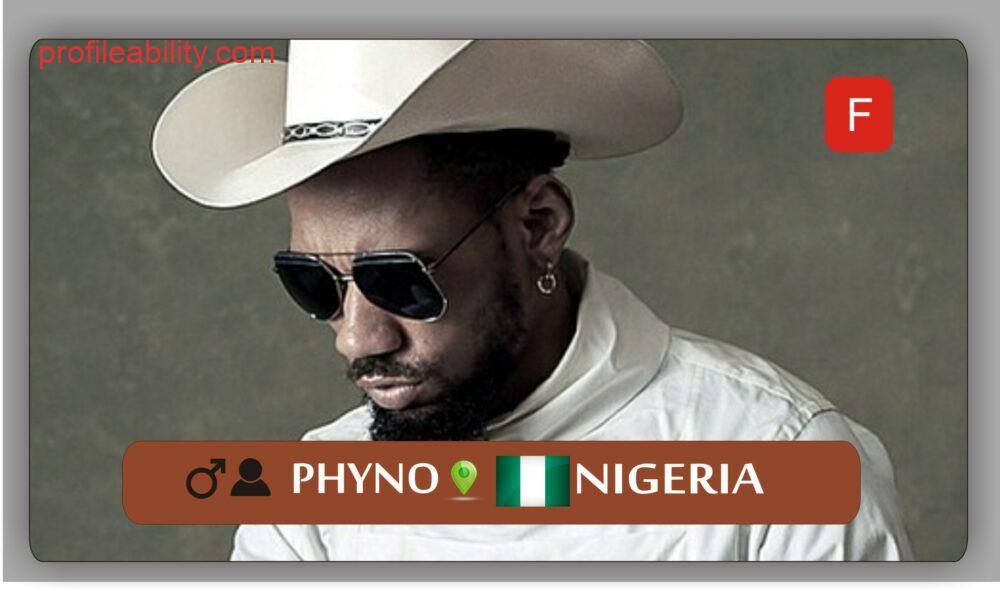 Azubuike Chibuzo Nelson (born 9 October 1986), better known by his stage name Phyno, is a Nigerian rapper and record producer. He started his musical career as a producer in 2003. He is renowned for rapping in the Igbo language. His debut studio album, No Guts No Glory, was released in 2014.
It produced the singles “Ghost Mode”, “Man of the Year”, “Parcel” and “O Set”. As a producer, he has worked with artists such as Timaya, Flavour, Ruggedman, Bracket, J Martins and Mr Raw.

Azubuike Chibuzo Nelson was born and raised in Enugu State. His stage name Phyno, which is derived from the word phenomenal, was the nickname given to him by one of his high school friends named Emeka. Phyno developed an interest for music production during his secondary school days.

He initially wanted to become a pilot, but was told that he could be a doctor. Throughout high school, he learned to play the drums and piano. He also learned to create his own rendition of every recording he heard. He studied public administration at the Institute of Management and Technology in Enugu, and started profiting from music during his second year at IMT. Phyno told Ifeoma Onoye that Mr. Raw is one of the few people he looks up to. Phyno started rapping in 2010 and relocated to Lagos to continue his music career.

Phyno started recording his debut studio album, No Guts No Glory, in 2012. The album features guest appearances from Stormrex, Omawumi, Olamide, Efa, P-Square, Timaya, Flavour N’abania, Mr. Raw, M.I, Ice Prince and Runtown. It was primarily recorded in Igbo and Nigerian Pidgin. Phyno told Joan Omionawle and Netwon-Ray Ukwuoma of the Nigerian Tribune that rapping in his native language is his strong suit.

On 25 September 2012, he released “Ghost Mode” as the album’s lead single.[7] The song features Olamide and was released to critical acclaim. It won Best Collabo at both the 2012 The Headies Awards and 2013 Nigeria Entertainment Awards. The music video for “Ghost Mode” was released on 7 December 2012. It was shot and directed in Lagos by Clarence Peters.

Sputnet Records released the album’s second single, “Man of the Year (Obago)”, on 23 March 2013. The song, which was produced by Phyno, managed to win the Best Rap Single category at the 2012 The Headies Awards. The music video for “Man of the Year (Obago)” was uploaded onto YouTube on 20 August 2013. It was also shot and directed by Clarence Peters in Abakpa Nike, and features a cameo appearance from Illbliss. In September 2013, the Nigerian Broadcasting Corporation banned the music video from being broadcast.

“Parcel”, the third single off the album, was released on 11 October 2013. The song was originally titled “Parcel (a BIG Nwa)”. The music video for “Parcel” was released on 19 February 2014 and shot by Clarence Peters. On 4 March 2014, “O Set” was announced as the album’s fourth single. The song was produced by WizzyPro and features P-Square. The music video for the song was directed by Jude Engees Okoye and uploaded onto YouTube at approximately 4 minutes.

On 22 May 2014, Phyno released the music video for “Alobam” which was directed by Clarence Peters. The song, which is an Igbo slang for “My Guy”, was produced by Major Bangz. In the video, Phyno paid tribute to some of his peers including Ice Prince, Flavour, P-Square, Olamide and J Martins.

On 31 August 2014, Thisday reported that Phyno became an ambassador of Guinness Nigeria’s Made of Black campaign alongside Olamide and Eva Alordiah. Phyno performed at the campaign’s launch and was featured in the campaign’s television commercial. On 2 September 2014, Phyno released the Clarence Peters directed visuals to his “Authe (Authentic)” song with Flavour N’abania.

On 7 October 2014, Phyno released the Major Bangz produced “Yayo”. The song debuted at number 8 on the Pulse Music Video Charts. The music video for the song, directed by Clarence Peters, premiered on 5 January 2015. Opeoluwani Akintayo of The Daily Times of Nigeria gave the video an overall rating of 8 out of 10 stars, while commending the use of props like burning tyres, shirtless guys, a throne made of cutlass, the video vixen’s butt, isolated location, papered and painted walls, smoky floor, and multi-coloured painted cars. Phyno’s collobrative album with Olamide, titled 2 Kings, was released on 1 April 2015. Plans for the album were first announced in January 2014 by both rappers via social media.

Phyno is widely known as the ambassador of rap music in the Igbo Language. He told the Nigerian Tribune that he raps in Igbo because he respects his culture and loves being himself. Although he primarily raps in Igbo, he combines a bit of Nigerian Pidgin and English in his music. Phyno believes that the elements of music makes it border-less.
Albums
No Guts No Glory (2014)
2 Kings (2015) (with Olamide)