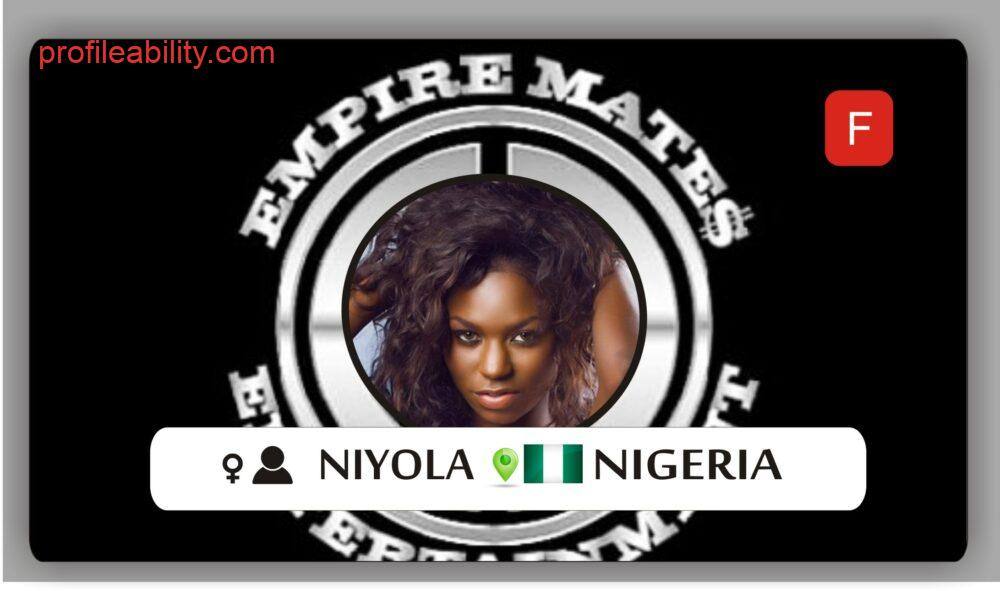 Eniola Akinbo aka Niyola is a graduate of English from the University of Lagos.

She is currently signed to Empire Mates Entertainment. Her sojourn into music began in 2000, when she emerged runner up at the Amen Starlet Competition. In 2005, Niyola began her professional music career and was briefly affiliated with eLDee’s Trybe’s Records, following that she put pen to paper on a production deal with Freestyle’s Make Sum Noise Entertainment.

Niyola’s first three singles; Me n U (In da club), No more and Dem say were released under this imprint.

Niyola’s self-titled debut album was released under WestSide Music. This album spawned hit singles; Bring it on and Call my name. She was rewarded with two Hip Hop World Awards (The Headies) nominations. While with WestSide,

Niyola signed a management deal with Efe Omorogbe’s Now Muzik. In 2009, she was featured on the OVATION RED CAROL theme song. Niyola has performed at major events like the Akon in Lagos Concert, the Calabar Christmas festival, the Y’hello Festival alongside Sasha and the Celtel tour. She also took part in the first Girl Power Tetmosol project.

Niyola has so far collaborated with Faze, RuggedMan, Freestyle, Sasha, L Marshall, Burnaboy and label mates; BankyW, Wizkid, Skales and Shaydee. Officially signed to EME in the second quarter of 2012, Niyola has released three singles and a video.
Niyola’s debut single under the Banky W/Segun Demuren led imprint was titled Don’t Delay Me (Don’t go there), this was followed up with a video for the infectious dance number. Her next project was on the remix of UK based act; L Marshall’s Castle alongside Burnaboy. In May of 2013, Niyola next two singles; Crazy and Toh Bad were released. The video for Toh Bad shot by Kemi Adetiba was released on November 11, 2013 to critical acclaim. Niyola and Oscar would team up again on her latest single titled; Belle No Be Showglass which features the prolific SoundSultan. It was released on December 4, 2013.