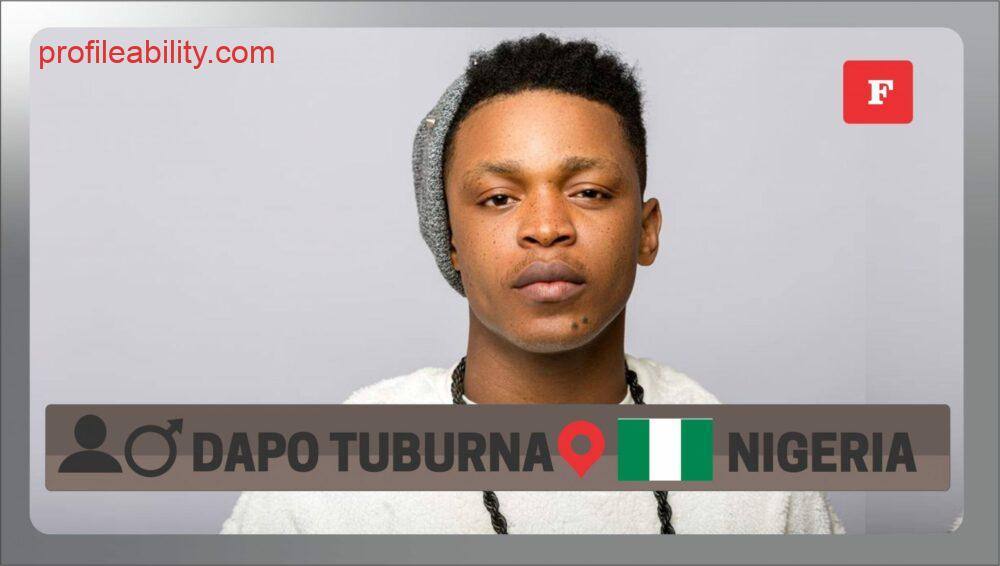 Dapo Tuburna is an Afrobeat musician born in Lagos Nigeria, on February 1st, 1992, Oladapo David Olajide is best known for his vocal strength and prowess as a recording artist, his poise and charisma as a performing artist, and his knack for storytelling as a songwriter.

Dapo Tuburna grew up, the last of 5 kids, in Oshodi, a suburban area in Lagos, Nigeria. He was greatly influenced by music from greats such as Fela Anikulapo-Kuti, Damian Marley, Femi Kuti and 2Face Idibia. He wrote and recorded his first song “First Foundation” at 12 and his uncle produced it.

He attended F.A.A.N Staff Primary School in Lagos, went on to the Nigerian Navy Secondary School Government School in Abeokuta, spent three (3) years studying Physics and Electronics at the Redeemers University in Osun, then he left to study music at the Ten Stringz Music School and to start a professional career in music.

In 2013, Dapo Tuburna recorded his first mixtape titled “Officer On Duty”. He made this collection of covers and original songs, hoping that it would be the demo he needed to land a record deal, which did not happen at the time.

While he worked on the mixtape, he teamed up with other students at the Ten Stringz Music School to make up his own band, which he named the Officers Band, and they started performing at different underground gigs in Lagos.

In 2015, he met Nigerian producer, Chopstix, who after listening to some songs off the mix tape and heard him freestyle, decided to feature him on a track called “Sai Baba” alongside emerging artists such as Dremo, Ceeza, D’Nyra and Ichaba. The success of that single inspired Dapo Tuburna to put out more music, so he teamed up with emerging music producer, EOD Wande to release a track called “Jesi” in March 2016.
Dapo Tuburna got a management deal with The Zone Agency in 2016 and put out the first single titled “Nothing”.
His journey to being a celebrated musician and performer is documented in a docu-series on his YouTube channel titled “Way Up”.

Dapo Tuburna - I Remember Everything (Audio)