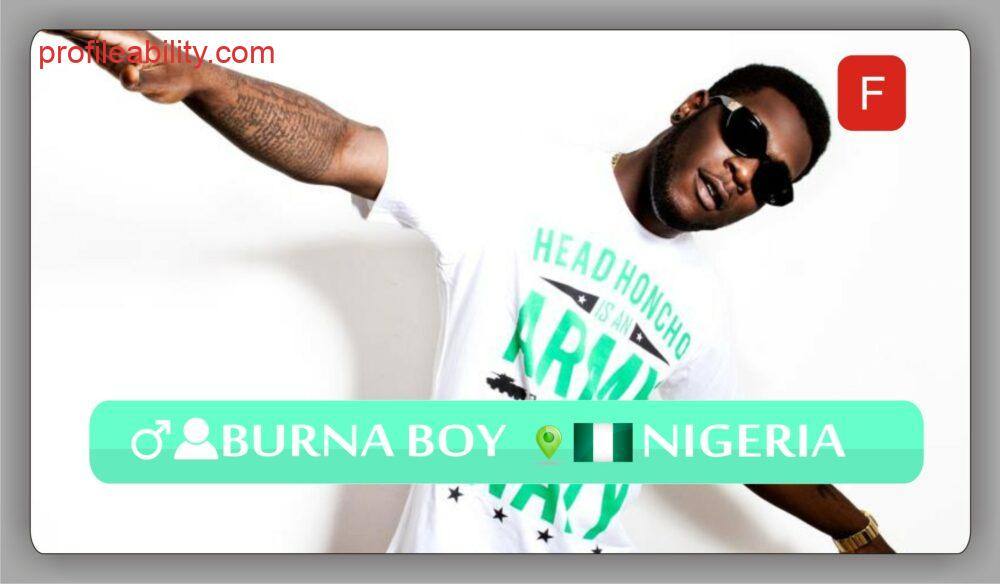 Burna Boy, Real Name Damini Ogulu, hails from Mbiama in Ahoda West Local Government Area in Rivers State, he was born on the 2nd of july 1991, had his primary education at montessori international school before moving to lagos, he also attended Corona, Agbara secondary school after
which he left for the UK and found his true calling “music” but never the less Burna Boy’s grand dad, Benson Idons, back in the days used to be the legend Fela Anikulapo Kuti’s manager, So, it’s no surprise Burna’s early influences to music have turned out to be..

Burna boy has a couple of hit songs including “trumpet” featuring Davido… the song that brought his first fame was “Abeg Abeg Abeg” before the big hit. ”like to party” which had an amazing video directed by “adasa square ball media” at this point now he is big and doing good in the music industry..

Burna Boy is a splendid vocalist and he oozes versatility as his unique sound blends Dance-hall, Afrobeat, R&B and Hip-Hop into one tightly knit package. His songs span from ballads full of depth, sometimes to controversial subject matter as well as, as his Dance-hall tendency implies, songs that are just meant to get you in the mood for the groove.

Signed to Aristokrat Records and, more often than not, teaming up with their in-house producer, the acclaimed Leriq; Burna Boy has been able to churn out two hot mixtapes – “Burn Notice” and “Burn Identity” back in April and November, 2011 respectively. “Burn Notice” produced the catchy anthem “Abeg Abeg Abeg”; the soulful “Sweetest Girl” featuring Leriq and the dance-hall candy, “Wombo Lombo Something”.

While “Burn Identity” showed a more mainstream quality to his music as he experimented with Reggae, some Afro Pop and more of his prevalent Dance-hall influenced sound.

Here, he jumped on Frank Ocean‘s “Novacane” to tell his sojourn into the music industry on “My Journey”; featured the likes of Davido, Korkormikor, L.O.S, P.R.E. (of Twisted Mindz), Sauce Kid and Shank, and produced such bangers as “Firewood”, “Trumpet” Feat. Davido, “Wickedest Luv” Feat. L.O.S. and “Friend Like Me” Feat. Shank.

Having created such a buzz in the industry, Burna Boy headlined his own Industry Nite this year, 2012 and has performed in a large catalogue of massive concerts, from – Rhythm Unplugged, the New Edition concert in Port Harcourt; CarniRiv and Calabar Carnival, to – his own Burna Boy Live in Port Harcourt.

Currently, his debut album “L.I.F.E.” which stands for “leaving an impact for eternity”. is in stores, iTunes, Amazon etc.