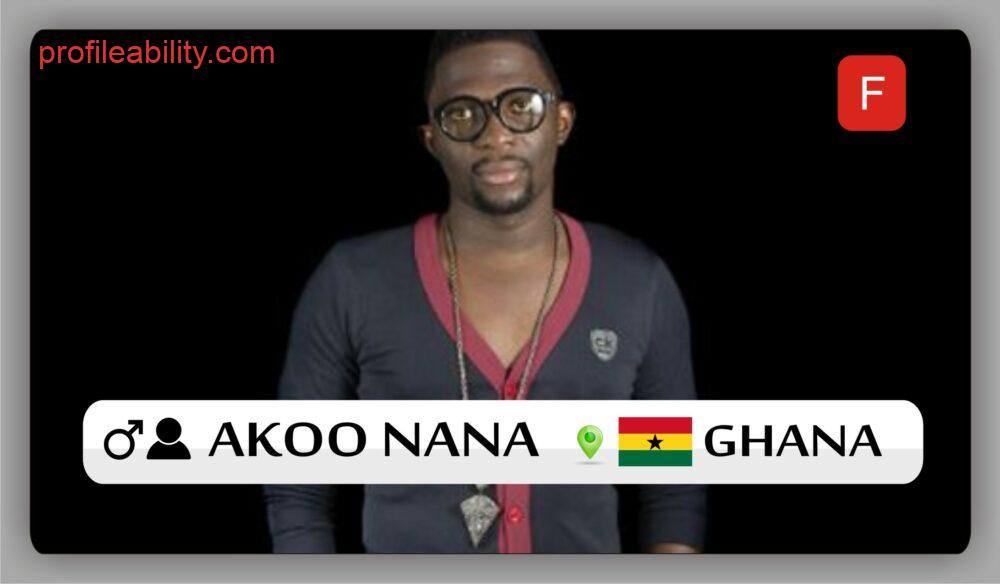 He  is a star whose name and music is on the lips of every music loving person across the length and breadth of Ghana.

Akoo Nana is the second of three boys. From an early age he had his heart set on becoming an entertainer. His flair for entertainment back at secondary school earned him the name “Akoo Nana”.

This is one of the reasons why one of the first things you notice when listening to his songs is his ability to put together mind boggling lyrics.

Despite picking up the love for music at an early age at Hamdala School in Kano, Nigeria, it was in ATTC and MOTESCO that he nurtured his talent. He found himself in an environment filled with people who shared in his dream to be a star in the entertainment industry, specifically by engaging themselves in the genres of hip-life and dancehall.

Due to his resilience and will to succeed in showbizness, Akoo Nana kept attempting to build a successful career by heeding advices from older and most experience folks in the industry.

In working with Reggie Zippy and Castro, who are both top musician, Akoo Nana has evolved, creating his own brand of Ghanaian music and in the process carved a niche for himself as an artiste who comes up the pleasantly unexpected.

The talented son of Anomabo in the Central Region of Ghana aims to reach beyond the shores of the African continent with his unique style of music. His inspiration comes from his admiration for artistes such as Morgan Heritage, Sizzla, Bob Marley, Amakye Dede, Daddy Lumba, Obrafour, MC Hammer, Tupac and Osibisa and it is the versatile mix of creativity and flexibility provided by these artistes that gives Akoo Nana his unique approach to music.

He dropped his first album, “Afa” in 2007 after having already teased Ghanaians with songs such as Obenewaa, Shordy which featured Castro and Reggy Zippy.Second album “Time to Explode” in 2010 also had Hits like ‘Mugu’, ‘Wasei Ho’ and now his third album has been released titled “M.P” which also has great hits like ‘Mwaii (Wash & Wear)’, ‘Maa Abena’, ‘Akoko Antwiwaa’, which have made and are still making huge impact on the Ghanaian music scene.

His collaborations and various features for renowned artistes also helped improve the young man’s status in the music Industry. He has worked with artistes such as Castro, Reggy Zippy, Trimatic, Zigi, Kofi B, She, Ruff-N-Smooth, Praye and many others.
His popularity and ability to thrill fans has enabled him grace many great stages and achieve many laurels in his short stint in music. He performed at the 2011 Citi FM’s December, Haiti Benefit Concert etc. Due to his hard work he earned nomination for Hiplife Song of the Year in the 2011 Ghana Music Awards.