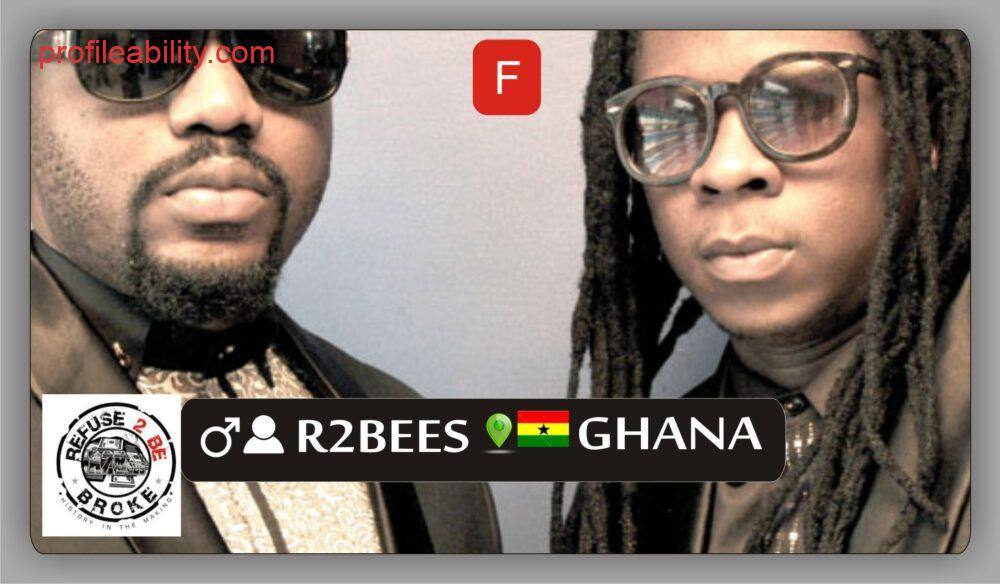 R2Bees is a Ghanaian hip hop and hiplife duo from Tema made up of Faisal Hakeem formerly known as Paedae da Pralem but now Omar Sterling and Rashid Mugeez with Mugeez as his stage name. They were nominated at the 2013 BET Awards.

Both born and raised in Tema, east of the country’s capital city – Accra in Ghana, West Africa. Paedae is the CEO and leader of the group, whilst Mugeez is the lead vocalist. The two cousins, who have been together their whole life, lived in the same house and also attended the same primary, a junior and secondary school in Tema. Beginning their career early, they started off representing their school in rap competitions as well as inter-school music contests. This led them to participate in the popular radio competition Kasahare, which they won most of and also performed at most shows; gaining them more buzz under their stage name at that time – Camp Yard.

R2BEES released their first single in August 2008 titled ‘Yawa Gal’, and became an instant hit. They then went on to release ‘I Dey Mad’, a chart-topper across Ghana. ‘I Dey Mad’ featured Unda Melodies. The song topped most Ghanaian Radio Music Charts for weeks. In 2010, R2Bees featured one of Nigeria’s biggest stars Wande Coal on their track ‘Kiss Your Hand’, as their third single.

The video was criticized but R2Bees did not come out with any explanation. In 2009, R2Bees released a 17-track album Da Revolution which has already released songs; ‘Yawa Girl’, I dey Mad’, ‘T.E.M.A’, ‘Kiss Your Hand’ with new songs; ‘Radio’, ‘One more Chance’ and ‘Africa’ with production from Killbeatz (Joseph Addison) as well as guest appearances from Wande Coal, Sarkodie, Samini, Kwaw Kese and a host of others.

On 29 March 2013, R2Bees released their second studio album, ‘Refuse To Be Broke – Da Revolution II’, at the place at the Silver Lounge at the Accra Mall. The 19-track album features hits such as ‘Ajeii’, ‘Life (Walaahi)’, ‘Odo’ and ‘Bayla Trap’. The album had guest appearances from Wizkid, Sherifa Gunu, Davido, Tinchy Stryder, and Voicemail. The album’s production was handled by KillBeatz who produced or co-produced all the tracks on it.

After the successful release of their album last year, R2Bees released their first official single for 2014, “Lobi”. The highlife-influenced song’s video was released on 25 September 2014. The single received massive airplay since its release.

R2Bees often sing and rap in their native language Twi and Pidgin. R2bees is one of the top purveyors of Ghanaian hip-pop subgenre hiplife, which mixes rap with sounds of hilife (African pop music) and reggae. In 2012, R2Bees was featured in Forbes’ list of Top 13 African Celebrities to watch in 2013.

R2Bees have had the privilege of performing on the same stage with international musicians such as American R&BÂ singers Mario and J Holiday.