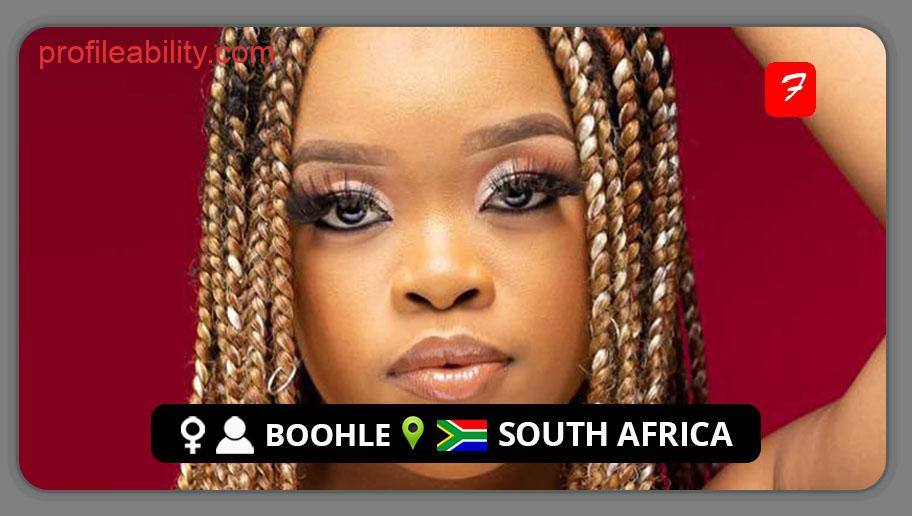 Boohle, a notable South African vocalist, songwriter, social media influencer, composer, artist, and entrepreneur, was born Buhle Manyathi in the township of Vosloorus in South Africa’s Gauteng region in 1998. She is well-known around the country for her incredible voice. Her lyrical vocals have breathed life into innumerable tunes, making her a vital force in amapiano.

Her artistic accomplishments have been aided by coming from a musical family. Music is a tool for the airy and deep-voiced vocalist to communicate her emotions and worldview. She became a professional musician as she grew older. In 2016, her signwriting abilities began to gain traction, and she began to collaborate with a number of music producers.

Boohle is a one-of-a-kind and gifted vocalist who has made a name for herself by spanning many musical genres. Choral music, Afro house, gqom, and even gospel were all things she experimented with. “Izibongo,” her 2020 debut EP, highlights the singer’s keen voice and writing ability as she addresses relationships, spirituality, and the quest for success with Afro-pop, Afro-soul, Afrobeats, and amapiano production.

Boohle became a household name because of her poignant earworms “Mama” and “Inyembezi” from her equally fluid first album, “Umbuso Wabam’nyama,” released in 2020 in partnership with amapiano stalwart Josiah De Disciple.

She has released a number of songs and albums and is now known as an Amapiano hitmaker. Everyone sways to the beats of her lively tunes.