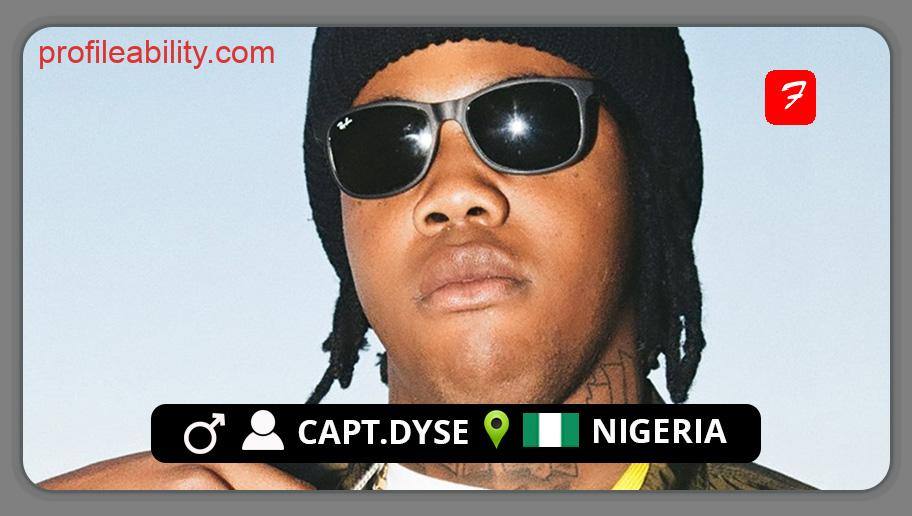 Ayobami Dyse Onafuye, professionally known on stage as Capt.Dyse or Suppa Trappa is a South African- based Nigerian rapper, singer, songwriter, and record producer. Capt.Dyse who is of Yoruba descent comes from Ijebu-Ode, Ogun State, Nigeria. His style is mostly Hip-hop, with a dash of contemporary fusion tossed in for good measure. He honed all of these skills throughout a seven-year career in music.

As a youngster, he was heavily influenced by listening to legendary musicians such as Tupac Shakur, Lil Wayne, The Game, J. Cole, Jay Z, Nneka, Asa, and others. He grew interested in music and became a member of the rap group ‘Young Killer Rappers.’ He has a Fine Arts National Diploma.

After finishing high school, he turned to the streets to pursue his ambitions of being a singer, which led to him leaving his native country to pursue his music career in South Africa.

He made his mark in the African hip hop industry with the release of his smash hit track “Monday Money,” on which he featured one of Nigeria’s surviving rappers “Yung6ix,” produced by Gizz Star. “Monday Money” was performed with a lot of enthusiasm from both artists, encouraging every hustler out there to go earn some money since it’s “Monday Money.”

Ever since, Capt.Dyse has been able to belt out tunes like ‘’Legendary’’ (2019), ‘’Big Dawg Statu’’ (2020) starring Kellylivinglarge, ‘’Gains Over Pain’’ (2020), ‘’Trap House’’ featuring Brainyboi and Kellylivinglarge as well as ‘’Am A Boss’’ with sensational Nigerian musician Leczy. The track was produced, mixed, and mastered by Geez.