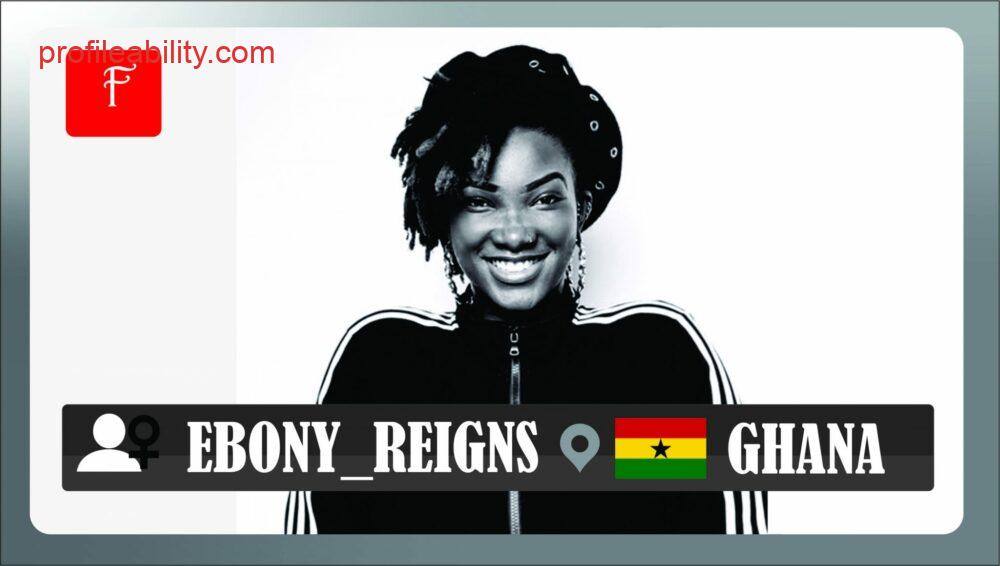 Pricilla Opoku-Kwarteng was born on 16 February 1997 and died on February 8, 2018; was popularly known by her stage name Ebony (Reigns). A Dancehall/Afrobeats artist based in Ghana, West Africa – widely known for her hit songs “Poison” and “Kupe”.
Born and raised in Accra, Ghana, Miss Reigns began her early education at Methodist Girls’ at Mamfe in the Akuapim North District of the Eastern Region before dropping out in 2015 to pursue her passion for music full-time.

Renowned musician and entrepreneur Bullet of Ruff n Smooth fame discovered ebony that same year after ebony sent a recording of her voice. Ebony got signed to the label; ‘‘Ruff Town Records’ just a day after sending her recordings. The young entertainer debuted her first single, “Dance Floor”, in December 2015 with a video and audio release just before the close of that year. The song became a hit on radio landing her a nomination for the unsung category at the 2016 Ghana Music Awards.

In March 2016 Ebony released her second single “Kupe”, which was a household anthem in Ghana and some other African countries and had over 270,000 YouTube views.

Subsequently in January 2017,  Ebony stormed the scene with sultry new visuals for her new song titled “Poison’’ (which gained over 480,000 YouTube streams).

The song premiered live on one of Africa’s leading radio stations (LIVE FM) with a cool dancehall and R&B feel. The  Poison video was shot in various locations throughout Dubai and was directed by Yaw Skyface.

On the 31st of May 2017, Ruff Town Records & Midas Touch Inc Independently launched Ebony’s 4th official project ‘Sponsor’ co-written by Ricky Agyemang (Bullet) performed in Patios, English, and Twi (local Ghanaian language) the upbeat Afro-Dancehall song which was recorded at AVO Studios (Ghana), and mastered by UBEATZ, the song produced by Wills Beats details the use and benefits of having a sugar daddy and an ‘extra man’ accompanied by some sleek 4k visuals shot across Ghana’s capital city Accra.

Just as people thought Ebony was done in 2017, She dropped two hot bangers in late 2017, “Hustle” and  “Maame Hw3” elevating the dancehall diva to the next level. These two songs gained her massive recognition and trends qualifying her from MUSIGA standard to MUSIGA professional.

Ebony Reigns was killed instantly in a traffic collision on 8 February 2018 whilst returning from Sunyani to Accra after a visit to her mother. Her assistant and longtime friend Franklina Yaa Nkansah Kuri and soldier Atsu Vondee were also killed in the fatal accident. The only survivor of the fatal crash was the driver. She died eight days before her 21st birthday.