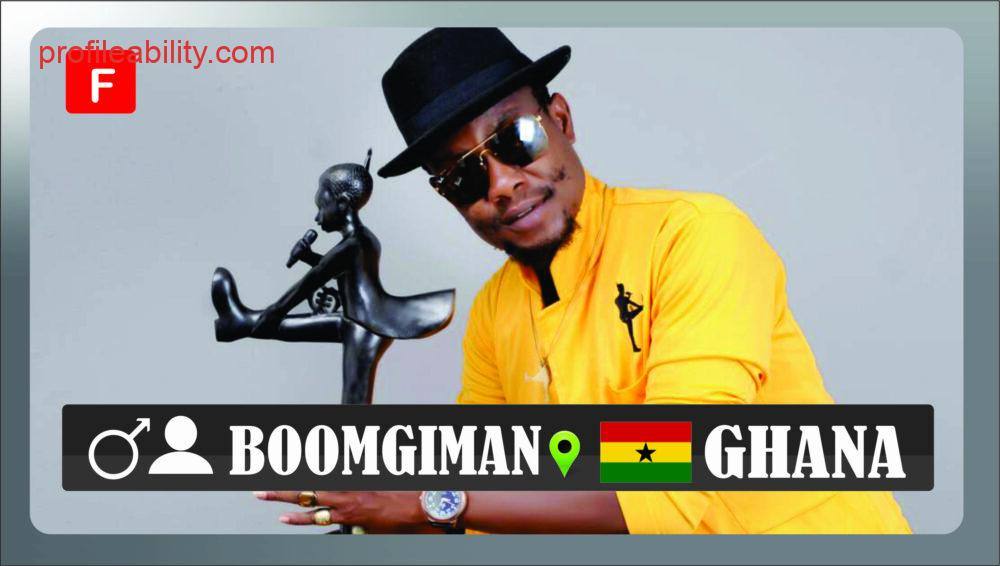 Boomgiman, Augustine Nii Adama Lokko known formally as Olonguazi Bonchaka is the face behind  Terry Bonchaka’s look-alike and a very close ally to the late Terry Bonchaka. He did attend the same basic school with him. Currently known as the Boomgiman he takes to the brand of Terry Bonchaka in every dimension, representing and living the late Terry’s legacy in style.

He disclosed to ProfileAbility  that the late Terry Bonchaka In 2003, blessed and imparted his aura around him when he had told Terry Bonchaka about his interest in music. Terry did try and tested him under various music platforms and performances, he later gave him to King Ayisoba to also assess him and try him. King Ayisoba upon many grounds also notified and confirmed that Olonguazi (by then) was indeed  very good at singing and had the potential to succeed.He did share various stages with King Ayisoba and did performed under PSI Programme to promote the Zoozi Album,

Terry’s unfortunate demise gave his blessed servant, Nii Adama or the BoomGi  the urge to carry on his legacy. Talking to  BOOMGIMAN he claimed he was again fully blessed by the family of Terry Bonchaka where he was additionally  adorned with the late Terry’s cowries, necklace and clothes as a gift from the family.

He holds unto  the rod emblemed at the top  with Terry Bonchaka’s ‘Poulele’ dance style.

One unique thing you would notice about the BoomGi man is his ability to sing like Bonchaka, dance like Bonchaka and captivate the crowd as Bonchaka did.

Why we haven’t heard from the Boomgiman all this while?

The question is, why all this years he has been hiding from the public’s eye. From 2005-2008 Nii Adama had to lay-low for sometime in order to pursue his education leaving the Bonchaka legacy  to grow wane; he furthered his education to tertiary level from 2008 -2012 meriting  a bachelor degree in Economics at the Central University

-Getting Back into the music Industry

As he has a legacy to fulfill, and moreover with music being  his heartbeat and passion, he decided  (after gaining and fulfilling his academic track records) to re-introduce the Bonchaka legacy and also push through his own path. He believes he has a lot of take in the music industry when it comes to the energy, the voice, discipline and the industrial trends.

Why BoomGi puts himself into the iconic Terry Bonchaka’s Shoe?

Right now  he lives the legacy of Terry Bonchaka but the BoomGi man also  seeks to push through his own path thus incorporating and  forming a music alliance and group  known as the   Boomgilliance, a crew he represents which pushes their own record label and brands their own clothing line.

BOOMGI means Beacon Of Our Majesty God Important, BOOMGi is a music and fashion  alliance organization.

Add to Favorites Teephlow whose real name is Lukeman Ekow Baidoo (born 20 June 1991),  is a Ghanaian award-winning hip hop recording artist. He was first noted at the maiden edition of the 2012 “Next Big Thing in GH Hip Read more…

Add to Favorites Dem Tinz is the stage name of Emmanuel Akesseh, a Ghanaian Rapper, songwriter and recording artist who was born and raised in Greater Accra, Ghana in the Western part of Africa. He Read more…