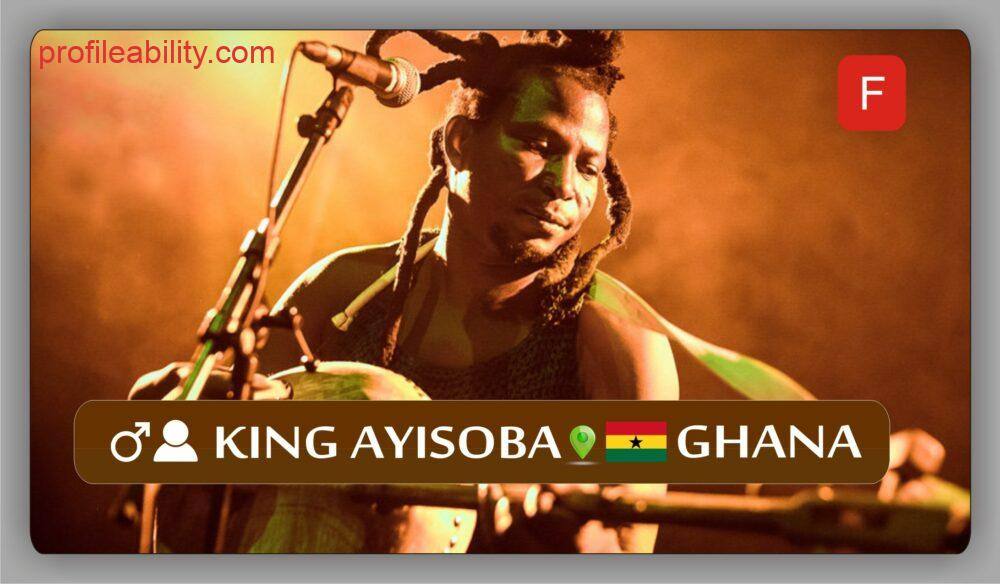 Born in 1974, near Bolgatanga northeast Ghana, King Ayisoba plays Kologo (small guitar with two strings attached to a gourd) from a young age.

King Ayisoba sings in Frafra, Twi and in English and is a big star in Ghana.

He takes care of livestock and carries his instrument in the bush and villages where he discovered traditional harmonic, ancestral rites and ceremonies.

He then joined the capital and delves into the urban jungle cosmopolitan Accra, and draft a style between tradition and modernity. He met Terry Bonchaka with whom he collaborated for several years and the musical producer Panji Anoff. A first “Modern Ghanians” album was recorded in 2006. The album was immediately welcomed by the Ghanaian public.

The single “I want to see you my father” won the Ghana Music Awards in 2007 and King is invited to participate in numerous collaborations. He continues in the same aesthetic, fusing electronic beats with his gravelly voice to traditional instruments.

He became one of Ghanaian artists who exports the most out of the African continent. In 2008, King Aysiboa released a second album, “Africa” and plays in Europe (Sweden, Norway, Denmark, Holland, Germany, Russia, UK, Belgium, France, Switzerland …) to Arnold alongside Boer aka Zea, singer the Ex group and producer of Makkum Records label.

They go out together a compilation LP from the last two albums in 2012. The group performed at numerous festivals, and was noticed at the Roskilde Festival (Denmark) or the Fusion Festival (Germany) …

The universe of King Ayisoba is singular and complex. The rhythms and frenzied dancing mingle his voice so special, gentle turn round and smooth and rocky and tribal. Their concerts are unique experiences, where the musical codes are shattered in a raw energy delivered bluntly.

King Ayisoba introduced the super catchy kologo beats to the bigger audiences in Ghana and abroad. The kologo is a two string guitar with a calabash gourd resonator, it is rhythmic and melodic at the same time. The King is bringing other musicians and dancers on this tour, dancing the traditional Frafra dia and kologo dances from the area of Bongo in Northern Ghana. The dance consists of very high jumbs and originates from hunting rituals.

Aboku Adortanga (dancer and dorgo player) is King Ayisoba’s brother and is a master in playing the “Dorgo”, a special horn from Northern Ghana used in the traditional Frafra tradition of music. The sound resembles a lamb calling out loud and was original used by the Frafra people in the forest to gather the village people to come and hunt. Gemeka is an absolute master in playing the guluku, a local drum from Bolgatanga Soko in Northern Ghana.

Since a few years the young Dagaati has been part of King Ayisoba’s band. At first he came to the concerts and kept coming and telling Ayisoba he could play Ayisoba’s songs on his xylophone. This is not normal since Dagaati comes from the Dagaati region which is upper west in Ghana.

But the addition of the xylophone to the kologo, drums and voice works fantastic and Dagaati became a core musician of King Ayisoba’s band and it is already hard to imagine how the band sounded without this very talented young man.

King Ayisoba offers a universe where the spirit world merges with the painful origins of music Kologo, concrete and Urban Hip Life, and the rebellious cry of a youth who is still seeking its identity. A mystical trance between the forest and the cracked concrete Accra.