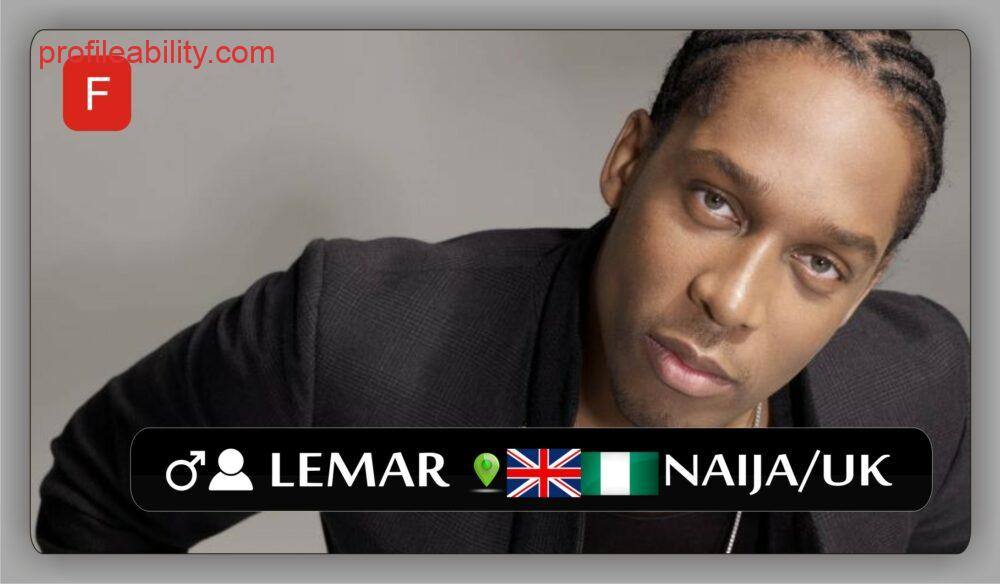 Lemar Obika born 4 April 1978, professionally known simply as Lemar, is an English R&B singer–songwriter and record producer. Lemar has had a run of chart success in the United Kingdom, Europe and Australia.
He rose to fame after finishing in third place on the first series of British talent show Fame Academy, which was won by songwriter David Sneddon.

Since then, Lemar has had seven top ten UK singles and sold over two million albums. He is seen as one of the most successful artists to come out of a reality TV show. Lemar has also won two Brit Awards and three MOBO Awards to date and released his fifth studio album in 2012.
Lemar Obika was born in Tottenham, North London, England to Nigerian parents of Enugu State, South Eastern Nigeria. He grew up listening to Pop and soul music. He used to sing at home with his brothers and sister, pretending to be The Jacksons.

He was 17 when he had his first concert at the Junior Jam at ‘The Temple’ in Tottenham supporting Usher.[citation needed] Later on he gave up an opportunity to study pharmacy at Cardiff University to pursue a musical career. Lemar had some success supporting various artists such as Destiny’s Child, Total, Uncle Sam and Usher Raymond on their UK club tours and after some years, managed to secure a recording contract with BMG.

Following this, he released his debut single “Got Me Saying Ooh”. His record deal with BMG fell through in less than a year due to restructuring at the record label. He had to eventually take a job working as an accounts manager at NatWest in Enfield, North London.

Lemar was most notably brought to public attention on the BBC’s Fame Academy in 2002, a combination of a talent quest and reality television show. He made the finals of the show winning plaudits for his version of “Let’s Stay Together” by Al Green and singing a duet with Lionel Richie on “Easy”. While he ended up finishing third in the show, which was won by David Sneddon, he caught the eye of fellow British soul singer Beverley Knight, who invited him to sing a duet with her during her concert at the Hammersmith Apollo.

Sony Music was so impressed with his potential that they signed him to a five-year record deal worth £1 million. He was also the contestant from Fame Academy chosen to represent the UK inEurobest, coming fifth (the eventual winner being Chenoa from Spain).

Lemar’s second single “Dance (With U)” reached number two on the UK Singles Chart in early 2003. His first album Dedicated was released late in 2003 with additional singles “50/50” and “Another Day” also achieving chart success in the UK.Following the success of the album, he commenced his first headlining tour of the UK. After completing his UK tour, Lemar was the opening act for Justin Timberlake’s UK tour dates.
On 12 November 2004 Lemar guested on Radio 1’s Live Lounge and performed a cover of U2’s song “Vertigo”. He has also performed for Prince Charles’ Prince’s Trust.

In early November 2004, Lemar released his first single from the album “Time to Grow”. “If There’s Any Justice” reached number three on the UK Singles Chart, and has become one of Lemar’s most recognised songs. “”Time to Grow”” was released following the single and peaked at number 8 on the UK Albums Chart, to date, the album has been certificated 2x Platuim by the BPI. Two other singles were released from the album, “Time to Grow” and “Don’t Give It Up”.

He is also one of the artists included on Band Aid 20’s single “Do They Know It’s Christmas?”.
4 September 2006 saw Lemar return with his eighth single, entitled “It’s Not That Easy”, which became his sixth UK top ten hit. A week later his new album The Truth About Love was released, which saw guest appearances from Styles P from The L.O.X., Mica Paris and Joss Stone. The album became Lemar’s highest charting album to date, peaking at number three on the UK Albums Chart, outpeaking Time to Grow (number eight) and Dedicated (number sixteen).

Two more singles were released from the album, “Someone Should Tell You” and “Tick Tock”. At the Brit Awards in 2007, Lemar was hoping to arrive in a makeshift limo, with James May from the BBC’s Top Gear. Lemar ultimately got frustrated with May and got out of the car after May repeatedly got lost. He featured on Sway’s first single “Saturday Night Hustle” from the album The Signature LP.

Lemar’s fourth studio album “The Reason” was released on 24 November 2008, entering the UK Albums Chart at No. 41. Lead single “If She Knew” was released on 10 November 2008, and peaked on the UK Singles Chart at No. 14. On 2 March 2010, Lemar released his second single from the album, “Weight of the World”, the song peaked at number 31 on the UK Singles Chart. He performed both singles on GMTV.

Lemar performed his new single “The Way Love Goes” on the BBC1 show So You Think You Can Dance on 9 January 2010.[1] He also performed the single on GMTV in February. The single was released on Valentine’s Day and peaked at number eight on the UK Singles Chart. On 8 March, the single was followed by his much anticipated album, The Hits.[1] Which – as well as including 10 hit singles from his four studio albums – also features four new tracks. In addtiton to “The Way Love Goes”, these include a duet with Britain’s chart-topping pop/R&B boy-band JLS on a re-recording of Lemar’s own 2003 ballad “What About Love”. On 19 March, Lemar and JLS performed the song together on Sport Relief.

On 11 March 2010 Lemar’s album The Hits hit number one on the R&B download charts on iTunes. Along with 9 of Lemar’s songs in the top 100 downloads. It peaked at number eighteen on the UK Albums Chart. Near the end of March 2010 Lemar performed a Radio 1’s Live Lounge version of “Empire State of Mind”. He also recorded cover versions of Beyoncé’s “Sweet Dreams” and Alicia Key’s “Try Sleeping with a Broken Heart”.

Lemar appeared as a special guest on the U.K Dates of Mary J. Blige’s World Tour. His confirmed dates were at Birmingham’s LG Arena, London’s O2 Arena and Manchester’s MEN Arena. The first date, in London, was on 2 November 2010. It was also been announced that Lemar would be the special guest on the U.K. dates of Enrique Iglesias’ Tour in 2011.
Lemar returned with his single “Invincible”, which he performed for the first time at Stoke 2012 Live. The release date for the single was 12 August, and will be the first single to be taken from the as yet untitled fifth studio album this year. on 21 June Lemar leaked the single via his official website, speaking to Digital Spy about the single he commented saying “Sticking together is what makes you invincible. When times are hard, it’s important to stick together and know what your values are.”

On his site The Re-View, Nick Bassett praises “Invincible” for its “narrative journey which showcases Lemar’s songwriting talents as well as his impressive vocal.”

Perhaps more important than any of Lemar’s musical accomplishments is the fact that he inspired a drink now consumed by the gallon in Shoreditch, East London. It combines three secret ingredients, and, when ingested, evokes such powerful memories of Lemar and Fame Academy, that it is almost as if one is transported back to the early 2000s. Although not widely advertised, if one learns the secret nod, the drink can be subtly ordered in almost any East London venue.